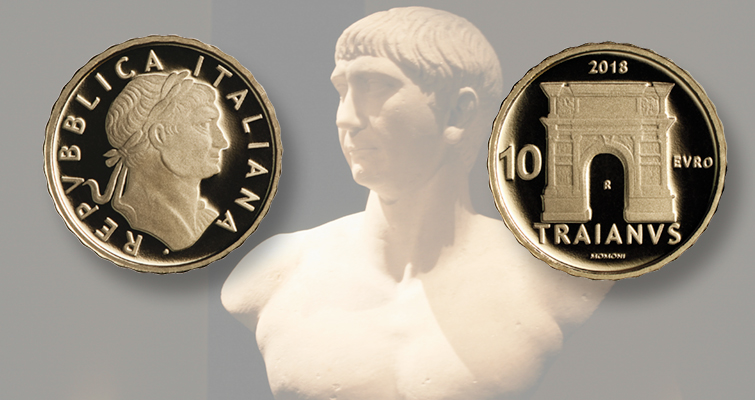 Marcus Ulpius Nerva Traianus (also known as Trajan) is depicted on a new €10 coin from Italy.

Italy’s latest coin delves far back into history to honor a famous ruler.

Marcus Ulpius Nerva Traianus (also known as Trajan), is universally recognized as one of the greatest Roman emperors. He was declared Optimus Princeps (the best ruler) during his lifetime, acting as Roman Emperor from A.D. 98 to 117.

Thanks to Trajan’s actions and to his great military, administrative and political capabilities, under his reign the empire reached its maximum territorial, economic and cultural extent, according to the Instituto Poligrafico e Zecca Dello Stato, the Italian State Mint.

He is the latest leader featured in Italy’s series of gold coins depicting Roman rulers.

The obverse of the Proof .900 fine gold €10 coin carries a right-facing portrait of Trajan, surrounded by the inscription REPVBBLICA ITALIANA, indicating the Republic of Italy as the coin’s issuer.

On the reverse is the famed triumphal arch of Trajan in Beneventum, erected by resolution of the Roman Senate at the junction of via Appia and via Traiana, on a route connecting Rome to the port of Brindisi.

As attested by the inscription on its attic, the arch was completed in 114 A.D. In the field, within the arch, an R identifies the Mint of Rome; on the left is the value 10; on the right, EVRO; above is the year of issue, 2018; and in the exergue is the inscription TRAIANVS and the last name of the designer MOMONI (representing Claudia Momoni).

The coin weighs 3 grams and measures 13.85 millimeters in diameter. 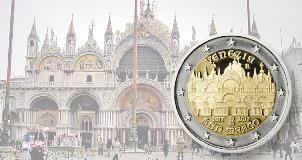