How to collect medals: Focus on one artist 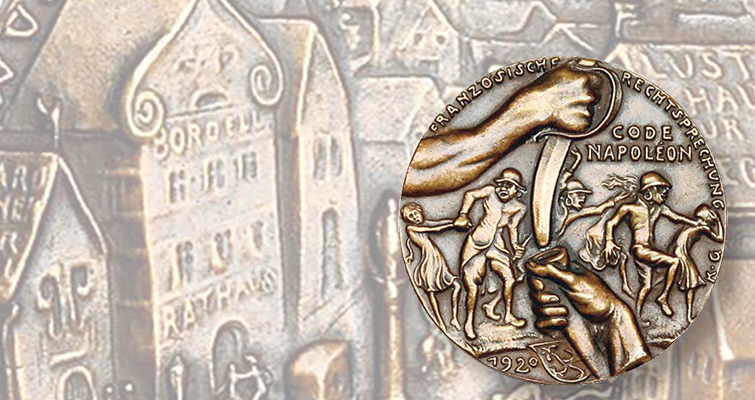 Collecting by artist is a common approach for medal collectors. Karl Goetz, who designed this medal that we describe further in the next slide, is among the collectible medalists. 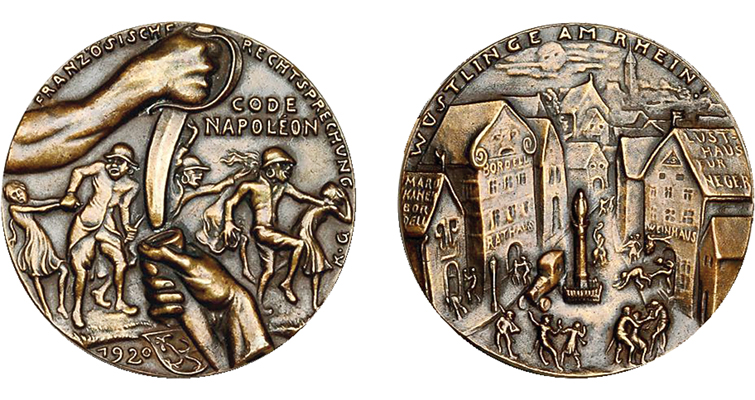 A 1920 Karl Goetz medal depicts French soldiers attacking German girls on the obverse while the other side shows German homes and public buildings being turned into brothels for French soldiers. 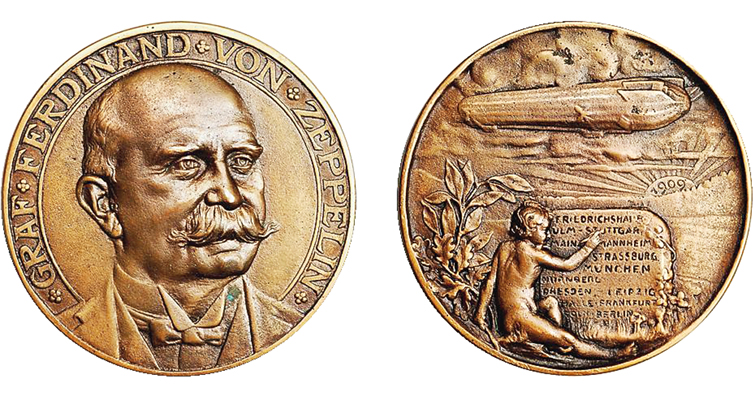 A 1909 Karl Goetz medal commemorating Ferdinand von Zeppelin and his airship is representative of the artist’s traditional, pre-Expressionist style. 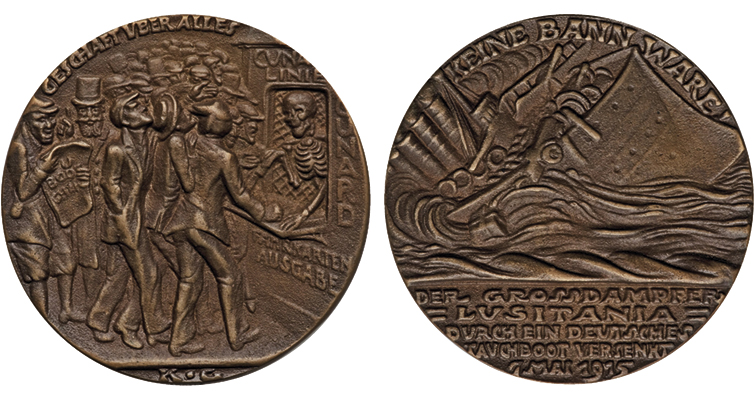 Karl Goetz’s 1915 bronze satirical medal depicting the sinking of the RMS Lusitania is typical of the artist’s powerful style and is his best-known medal. This crude contemporary cast brought $305.50 at a 2012 auction.

The following is the third in a multi-part series from our Dec. 5, 2016, issue of Coin World about collecting medals:

We've already covered how one can build a set, so let's move on to how you can focus on a particular medalist.

Another mode of collecting medals is to focus on the work of a single medallic artist. Collectors are drawn to the Expressionistic medals of German medalist Karl Goetz (1875 to 1950) because of the strong emotional power he is able to convey in his pieces.

Goetz began his career as a medalist working in a traditional style, creating accurate portraits and inoffensive medals of those in power to perpetuate heroic images of Germany’s leadership.

By World War I he switched to a more powerful Expressionist mode that had elements of caricature along with an ever-present reminder of the death that accompanies war.

As dealer Paul Bosco writes, “By applying the style of modernist cartoon art popular in posters and the scatological humor of earlier satirical medals to the renaissance format of the cast bronze medal, Goetz produced a series of works that movingly convey German triumphalism during the first World War, its nationalist and racist response to the humiliating defeat of the war, and the growth of nihilistic culture that culminated in the Nazi movement. After Goetz, the medal was never again the same.”

As text for the British Museum’s 2014 exhibit “The Other Side of the Medal: How Germany Saw the First World War,” curator Tom Hockenhull wrote that Goetz and his peers used medals to probe “the psychological effects of war, distorting reality to convey mood and emotion. Vulnerable stick-like figures become dominated by giant war machines in scenes that strip humanity of its individualism.” Looking closely at his medals confirms this observation.

Goetz is best known for his 1915 medal depicting the sinking of the RMS Lusitania on May 7, 1915. The sinking of the ship by a German torpedo resulted in the loss of civilian life and influenced the United States to enter the conflict. Goetz was understandably moved by the event and responded in medallic form.

His medal initially included the date of the sinking as May 5, 1915, two days earlier than the actual event. Those who saw the medal in Britain used the early date as evidence that the sinking was premeditated by the Germans, and the British reproduced that version of the medal to serve as propaganda. In reality, Goetz likely just made a mistake that he soon corrected with the May 7 date.

While the Lusitania medal is Goetz’s best-known work, other lesser-known medals within his oeuvre are even more powerful. His medal known as Code Napoleon, like the Lusitania medal, shows the impact of war on individuals beyond the battlefield. Goetz uses the medal to critique the French occupation troops for not following French Civil Code in Germany.

The website www.karlgoetz.com is a helpful resource to get a sense of the artist’s diversity, and it describes the Code Napoleon obverse, writing, “In the foreground a hand removes a knife from its French scabbard, as identified by the Gallic coq coat-of-arms next to it, while in the background French colonial troops are tormenting German girls by catching them and forcing them to unseen locations.”

The reverse depicts a town square, dominated by a statue of the Virgin Mary as the Immaculate Conception. Surrounding the square are wine houses and brothels as soldiers chase German girls. The website concludes, “This medal implies that the German women were free objects to be hunted by French colonial troops and that German residences were converted into brothels by French military authorities.”

The incredible variety of Goetz’s work and his prolific nature provides collectors with lots of choices and requires some tough decisions (unless one has unlimited funds). Typical early pre-World War I Goetz medals can sell for $150 to $300 while the more desirable World War I satirical medals can sell for $300 to more than $1,000.

Numerous variants of the Lusitania medal exist, the most inexpensive being the cast iron medals struck in Great Britain that can sell for $50 and up. Reproductions exist of many of Goetz’s medals, so the counsel of a trusted dealer is recommended before embarking on a collection. 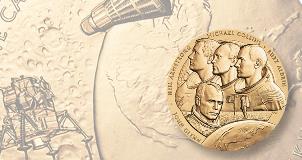 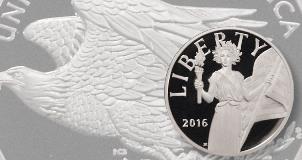