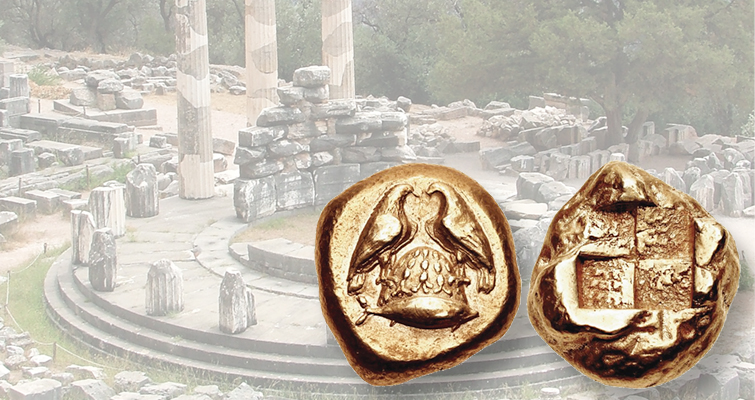 A circa fifth- to fourth-century B.C. electrum stater of Mysia represents the founding myth of Delphi, the sanctuary of Apollo. The coin is estimated to realize $20,000 in a May 18 auction.

Ancient legend suggests that Apollo, the son of Zeus and Leto, came down from Mount Olympus and traveled through northern and central Greece until he finally found the proper site for the foundation of his oracle at Crisa under the snow-capped Mount Parnassos.

As described in the Homeric Hymn to Apollo, Apollo laid out his temple and then slew a she-dragon that inhabited the area.

According to tradition, two eagles that had been released by Zeus, one flying from the east, and the other from the west, met exactly at the site of Apollo’s sanctuary, as identified by the omphalos (navel) stone, which marked the sacred precinct of the sanctuary of Apollo at Delphi as the physical center of the earth.

This legend is central to the design of a circa fifth- to fourth-century B.C. electrum stater offered in Classical Numismatic Group sale No. 102, closing May 18.

The coin, issued in Kyzikos, in Mysia, shows the eagles standing on the stone on the obverse, with the tunny fish (tuna) appearing below because it is the badge of the city. This scene was frequently represented in vase paintings, but is extremely rare on coinage, according to the auction house.

“The omphalos probably stood on the sacred hearth that was in the center of the temple,” according to the catalog.

The reverse, as is typical for many electrum coins (which count as among the earliest of western coins), features incuse squares. Electrum is a naturally occurring alloy of silver and gold.

A religious festival called the Stepteria was celebrated every ninth year at Delphi to commemorate these events associated with the foundation myth of the sanctuary.

According to the auction house, the myth goes that, after Apollo established his sanctuary, he set about recruiting attendants for the temple. He noticed a ship passing by, manned by Cretans from Knossos on their way to Pylos. Apollo transformed himself into a dolphin (hence the name of the city) and leaped aboard the Cretan ship.

“At first the men tried to throw the dolphin back into the sea, but they were ‘awed’ by it into a ‘fearful submission,’?” according to CNG. “After a lengthy voyage, Apollo led the ship to Crisa, where ‘he leaped ashore and revealed himself as a god amid a blaze of fiery brightness and splendor.’ He ordered the Cretan men to perform sacrifices and to pray to him as Apollo Delphinius. He then led them to his sanctuary and placed the Cretans in charge, predicting great wealth and prestige for his temple.”

This story linked the early cult of Apollo to Crete and promoted Apollo as the god of sailors and colonization. His oracle at Delphi played a major role as the religious impetus for the Greeks in establishing their colonies, hence its importance to the residents of Kyzikos, itself a colony of Miletos.

The coin grades Near Extremely Fine, according to CNG, and has an estimate of $20,000.