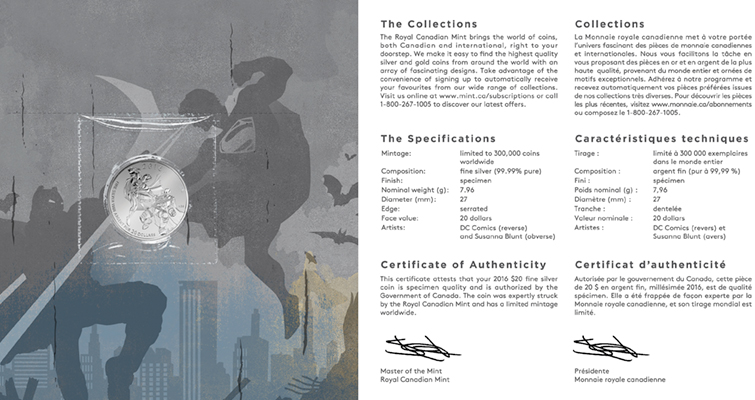 Batman and Superman face off in battle on the reverse of a 2016 silver $20 coin from Canada.

Batman and Superman clash on the Specimen Finish 2016 .9999 fine silver $20 coin from the Royal Canadian Mint.

The coins are an homage to Batman v Superman: Dawn of Justice, a movie that debuts March 25.

According to the RCM, “Fearing the actions of a god-like super hero left unchecked, Gotham City’s own formidable, forceful vigilante takes on Metropolis’s most revered, modern-day savior, while the world wrestles with what sort of hero it really needs. And with BATMAN and SUPERMAN at war with one another, a new threat quickly arises, putting mankind in greater danger than it’s ever known before.”

The reverse of the coin features a battle of unprecedented proportions between two of the foremost superheroes.

Descending upon a crouched Batman, Superman wears a costume that is a variation of the one seen in the movie Man of Steel. Here, he raises a clenched fist and bears an expression of utmost intensity as he prepares to use his super strength against Gotham City’s Dark Knight.

“Batman’s grimace is intensified by the white glow of his eyes beneath metallic battle armor, which is bulkier and more resilient than his own iconic costume — a strategy that could help even the odds in a tension-filled combat that pits human strength and smarts against formidable alien super powers,” the RCM said.

The coin weighs 7.96 grams and measures 27 millimeters in diameter. It has a mintage limit of 300,000 pieces and is presented in a clear vinyl pouch in a certificate booklet.

Distributor Talisman Coins offers the coin for $19.95 plus shipping and handling.

To order the coin, or for more information, visit the distributor website. 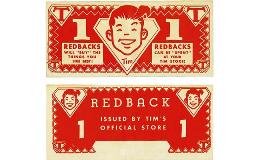 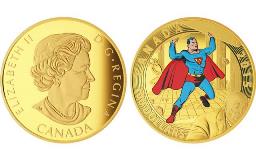