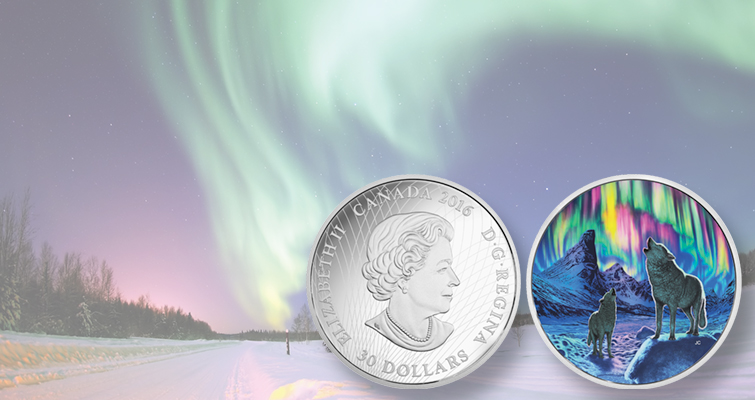 The dancing colors of the Northern lights draw visitors to northern latitudes around the world, including Canada.

A new Proof .9999 fine silver $30 coin from the Royal Canadian Mint, however, brings the color of the lights to collectors everywhere.

In Canada’s far-northern latitudes, where solitude and beauty often meet, nature takes center stage with a celestial light show that, once seen, is seldom forgotten.

“Using innovative glow-in-the-dark technology, the spellbinding qualities of the aurora borealis are beautifully recreated on this colored coin that captures the look and feel of a luminous winter night in the wilds of Canada’s Arctic region,” according to the RCM.

The 2016 coin, which was launched Jan. 12, is the second in a series that combines detailed engraving, glow-in-the-dark technology and full color.

The multicolored glow-in-the-dark technology adds radiance of varying intensities to the aurora borealis and casts a glow on the howling wolves in the Arctic landscape below. To experience the design’s full effect, place the coin in a light source for 30 to 60 seconds then bring it into the dark to view the spellbinding glow — it’s even visible through the capsule.

The reverse image by Canadian artist Julius Csotonyi brings together rich colors and detailed engraving to recreate the breathtaking beauty of a winter night in Nunavut’s Auyuittuq National Park.

With the imposing vertical cliff of Thor Peak looming in the background, two Baffin Island wolves (Canis lupus manningi) stand upslope in the frozen river valley where they lift their muzzles to the sky and release their howl into the crisp air.

The obverse features the word CANADA, the face value of 30 DOLLARS, the date 2016 and the effigy of Queen Elizabeth II by Susanna Blunt.

The coin weighes 62.67 grams and measures 54 millimeters in diameter. It has a mintage limit of 4,000 pieces and retails for $129.95 from distributor Talisman Coins. 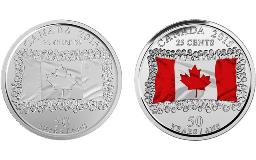