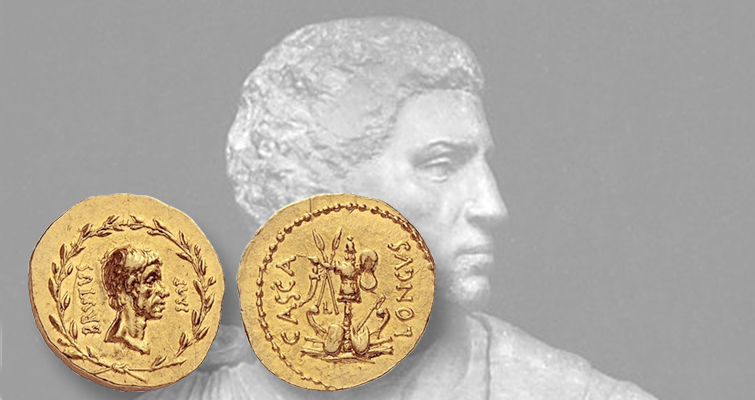 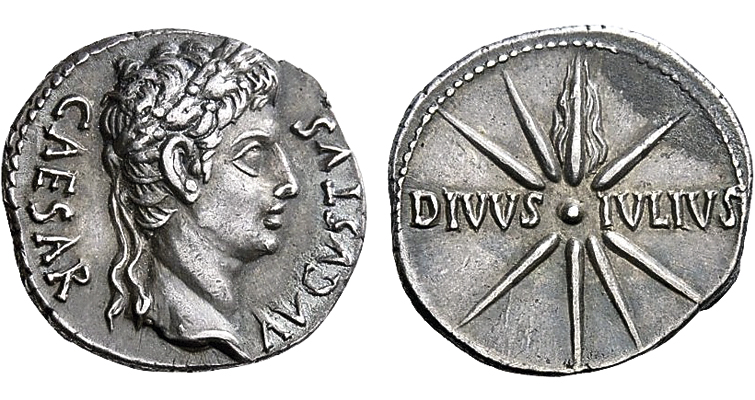 This silver denarius of circa 19 to 18 B.C. is believed to celebrate Augustus’ plans to hold secular games in 17 B.C. A comet on the reverse is an omen related to the Roman emperor. 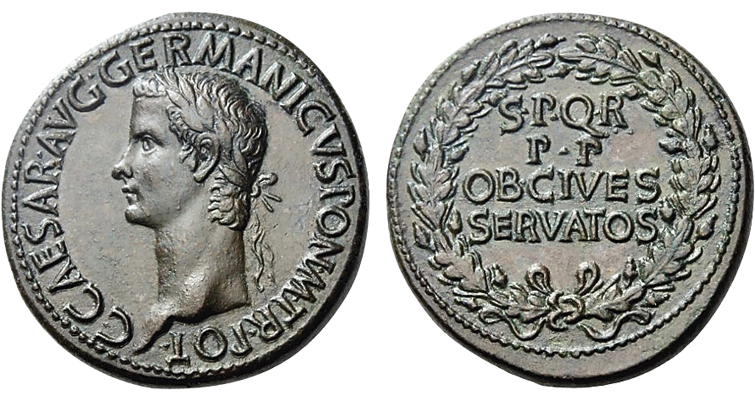 A stylized portrait of Gaius Caligula appears on this circa A.D. 37 to 38 bronze sestertius.

What does a collector do when the thrill of the chase wanes as it becomes difficult to add new coins to a collection?

For collector Mike Gasvoda, the answer was to sell many of his ancient Roman coins of the 12 Caesars and shift his focus to other ancient coins. Numismatica Ars Classica offers the first auction from his collection on Oct. 8, featuring 191 lots.

The Twelve Caesars is a set of biographies of Julius Caesar and the first 11 emperors of the Roman Empire. Gasvoda built his collection of Twelve Caesars coins during the past 20 years.

“The historical period covered by the twelve Caesars is one of the most well-documented and interesting periods in the history of western civilization,” Gasvoda wrote. “The decision to sell the collection was very difficult. While my interest in the Twelve Caesars remains extremely high, my ability to add new pieces to the collection became quite limited. I am too picky and the coins I needed either were not available or so expensive as to severely limit my ability to afford them.”

In the Twelve Caesars collection, Gasvoda focused on designs in three metals.

Because coin designs in each metal were made for specific audiences, an emperor could have different messages on each coin.

“Collecting in all three metals was the only way to get the complete picture of the propaganda that an emperor was expounding via his coinage,” Gasvoda wrote.

The marquee lot in the sale is the circa 43 to 42 B.C. gold aureus of Marcus Junius Brutus with Servilius Casca Longus.

The coin was struck by a mint moving with Brutus in the East, not long before he and Cassius were defeated at Philippi by Mark Antony and Octavian. Brutus was the conflicted nobleman who forged the plot to murder Julius Caesar. Including his portrait on coins contradicted some of the sentiments he proclaimed as a defense for his murder of Caesar.

Brutus struck three issues of aurei with his portrait, and this issue with fellow assassin Servilius Casca named on reverse “may offer the most truthful depiction of Brutus, perhaps eclipsing the very best portraits on the [Ides of March] coinage,” Gasvoda said.

This coin is in Uncirculated condition and may be the finest example known.

A silver denarius issued circa 19 to 18 B.C. is one of the DIVVS IVLIVS comet issues.

The comet on the coin type is believed to be related to Augustus’ plans to hold the secular games in 17 B.C. After the death of Julius Caesar in 44 B.C., comets were viewed as an omen relating to the Roman emperor.

This coinage reinforced the deification of Augustus. Augustus is shown wearing the oak wreath in symbol of the senate honoring him with the ”Corona Civica,” an honor bestowed upon a Roman who saves another Roman’s life. In this case, Augustus saved untold Roman lives by ending the civil war then raging in the empire.

The coin has cabinet toning and is in Extremely Fine condition, according to the firm. The coin has an estimate of 3,000 Swiss francs (about $3,137 U.S.).

A highly idealized portrait of the Roman ruler Gaius Caligula appears on a circa A.D. 37 to 38 bronze sestertius.

The portrait ”jumps off the coin,” Gasvoda wrote. “The color is spectacular and this is about as close to mint state as a bronze coin can be,” he wrote.

Caligula assumes strong godlike qualities on this coin, thanks to the honorific titles bestowed upon the emperor by the Roman senate upon his ascension. The titles are present on both sides of the coin.

However, “Caligula would prove to merit none of these honors as his rule, which started with much hope, quickly eroded to the point that he was eventually killed by his own praetorian guard,” Gasvoda wrote.