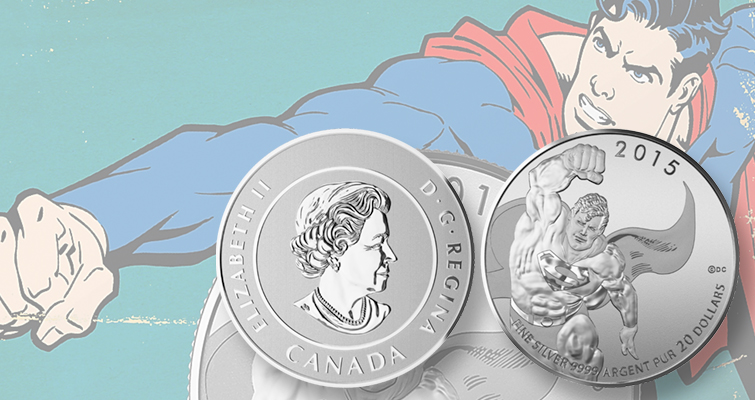 Superman flies again on Canadian coins, and this time, a lot more collectors will be able to collect him.

The Royal Canadian Mint on Aug. 12 announced a new 2015 silver $20 coin showing the super hero, and the coin is available at face value this time. It’s part of the RCM’s popular “$20-for-$20” series and, with a mintage limit of 350,000 pieces, has the highest mintage limit yet for any coin in the series.

The mintage is also far higher than the mintages for the two popular Superman collector coin programs from the RCM in 2014 and 2015.

The silver $20 coin’s reverse features an engraved rendering of Superman in flight. His cape billowing in the wind, the Man of Steel takes to the sky with a determined facial expression. Fist raised, Superman is ready for action in this classic pose, complete with the world-renowned S-shield emblazoned across his chest.

The silver $20 coin flies ahead of a new DC Comics Originals series of commemorative coins of another denomination.

The DC Comics Originals series has a classic, slightly retro style, recalling the look most comic book fans grew up with and remember fondly, according to the RCM. The Originals series coins are issued as Matte Proof .9999 fine silver $10 coins.

The reverses of these coins are meant to mimic a comic book splash page, according to the RCM. A splash page is a large drawing, often full-page,  that introduces a new story.

The first coin, issued under the Gauntlet title, is due for release Sept. 1.

On this next coin, the Man of Steel faces off against his foes: Superman’s greatest nemesis, Lex Luthor, is at the far right in his battle suit; Phantom Zone criminals General Zod, Faora and Quex-Ul are above Lex Luthor in an attack position; and a robotic Brainiac flies alongside the diminutive Mister Mxyzptlk to complete the horde.

The second coin, dubbed Strength, is scheduled for release Oct. 6. and honors Supergirl.

The “Girl of Steel” stands cheerfully, hands on hips, veiling her true power and a strength that rivals Superman’s. To her right is a lasered retrospective of Supergirl’s history, including her alternate costume from the early 1980s, complete with headband.

A third coin, also showing Supergirl, is due for release Nov. 3.

In addition to a colorful Supergirl, this coin includes laser engraved images of Batgirl and Wonder Girl. The trio of confident superheroes is depicted each in her recognizable costume, ready to act united in battle against evil!

The final coin, scheduled for release, Dec. 1, shows Superman flanked by those who helped forge his legacy.

The Man of Tomorrow stands in the center in a calm yet powerful stance; at the bottom on either side are scenes from his infancy, with the Els (his birth parents) to the right and the Kents (his Earth foster parents) to the left. Also found to his left are his friend and longtime love interest Lois Lane, and friend and closest ally, Batman. On Superman’s right are his pal Jimmy Olsen and Wonder Woman, whose strength and power often rival his own.

These coins each weigh 15.87 grams and measure 34 millimeters in diameter.

To learn more about the coins, or order them as they become available, visit the RCM website.

Want to read about other Superman pieces from Canada? Check out these Coin World stories!