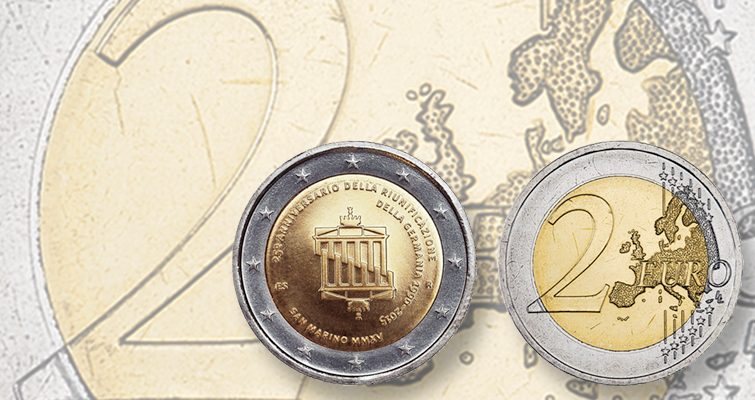 San Marino celebrates the 25th anniversary of Germany’s reunification with a commemorative €2 coin.

The Reunification of Germany was officially ratified Oct. 3, 1990, a year after the fall of the Berlin Wall that had divided Germany and Europe for decades. On that date, 25 years ago, the Federal Republic of Germany sprang forth from the geopolitical landscape.

San Marino marks the 25th anniversary of reunification with a 2015 commemorative €2 coin.

The coin was designed by Erik Spiekermann, a German designer internationally known for designing typographical characters, who is also a professor at the University of Arts in Bremen.

The obverse of the coin depicts two representations of the Brandenburg Gate, joined in symbol of the reunification of the two peoples.

The gate was the first place where many people from both sides of the wall met after the wall’s demolition. Today the Brandenburg Gate remains as a most famous Berlin monument and a reminder of the division that once defined Europe.

The ringed-bimetallic coin has a copper-nickel core and copper-aluminum-nickel ring. The coin is the standard size (25.75 millimeters in diameter) and weight (8.5 grams) for €2 coins.

In total, 100,000 coins in colorful card packaging are available, offered at an issue price of €15 each.

To learn more about the coin or purchase the coin from San Marino’s office of philatelics and numismatics, visit the office’s website.