American designer Adolph A. Weinman appears on coin from Tuvalu 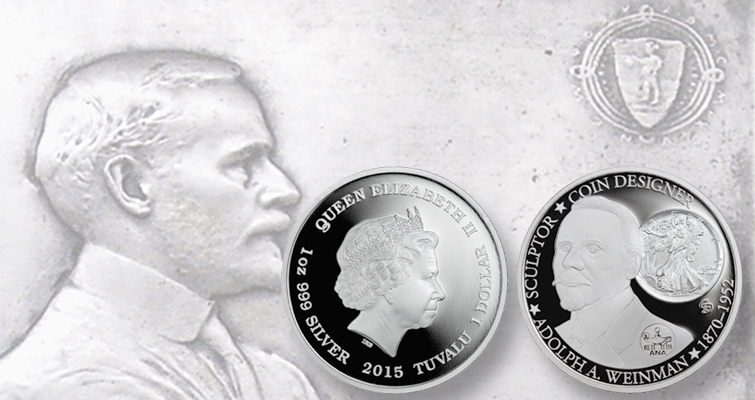 Coin designer Adolph A. Weinman, who designed some of America’s most memorable coins, appears on the latest coin from Tuvalu.

Designed by ModernCoinMart staff artist Charles D. Daughtrey, the 1-ounce .999 fine silver $1 was minted by the Perth Mint of Australia. This is the second coin in a series of exclusive coins that were minted for release at the American Numismatic Association World’s Fair of Money.

MCM released the first coin in the series, Augustus Saint-Gaudens, last year at the same event.

RELATED: See the first coin in the series issued in 2014

Weinman was commissioned to work with other artists he knew, such as Saint-Gaudens and James Earle Fraser, as a part of the so-called “Renaissance of American Coinage” that occurred between 1907 and 1916.

Most U.S. circulating coin designs were changed to have a more distinctly American appeal, with representations of Americana of the time period. Two of the coins with new designs — the Winged Head Liberty (or “Mercury”) dime and the Walking Liberty half dollar — were designed by Weinman.

The latter design, for the U.S. half dollar's obverse, accompanies an image of the designer on the reverse of the 2015 coin from Tuvalu.

At the left, the reverse shows Weinman in a three-quarter front view. To the right of his portrait is an obverse view of a Walking Liberty half dollar. The Walking Liberty design bears a “glass bead” semi-frosted finish to contrast with the heavy frost on the Weinman effigy.

The logo of the ANA appears on Weinman’s left shoulder.

Examples of the coin are available in original packaging or in graded and encapsulated by Numismatic Guaranty Corp., at the Proof-69 Ultra Cameo and Proof-70 Ultra Cameo grade. The NGC graded coins that were available at the ANA show have a grading insert with special text, “Chicago ANA Releases.”

All options are accompanied by the original government packaging, which includes a certificate of authenticity signed by Daughtrey.

Discounted pricing was available to attendees of the ANA World’s Fair of Money in Chicago, where the coins were first offered.

The coins will be offered through the MCM website beginning around Aug. 18.

Like Weinman's coin designs? Check out these Coin World stories about related collectibles.