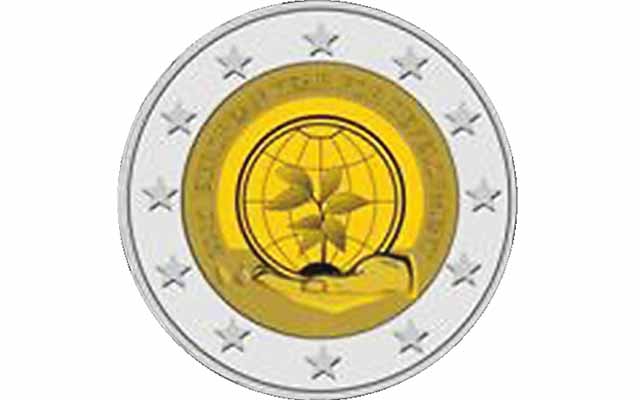 Belgium is honoring the European Year of Development 2015 with a circulating commemorative €2 coin.

Belgium plans to celebrate the European Year for Development in 2015 with a circulating commemorative €2 coin.

The European Year for Development is a designation from the European Union. 2015 is the last year scheduled for achieving the collectively agreed upon Millennium Development Goals and the year in which major decisions will be made about the framework that will replace those goals.

The obverse of the ringed-bimetallic coin features the commemorative design.

The inner part of the coin depicts a hand holding globe. Framed within the globe is a growing plant. The inscription 2015 EUROPEAN YEAR FOR DEVELOPMENT features in an arc above the globe.

The country code, BE, appears beneath the hand, while the signature mark of the Master of the Mint and the mark of the Brussels mint, a helmeted profile of the archangel Michael, are to the left of the hand's fingertips.

In total, 250,000 coins are set for release at some point in September.

The ringed-bimetallic coin's core is copper-nickel, while the ring is composed of copper, aluminum and nickel.

The coin’s common reverse shows a map of the European Union.

Each eurozone nation may issue up to two circulating commemorative €2 coins annually, not including any €2 coins issued as part of a joint program. The 2015 program celebrating the European flag’s 30th anniversary, for example, does not contribute to the two-coin limit.