When pictures tell a story: muted coins are a hot trend 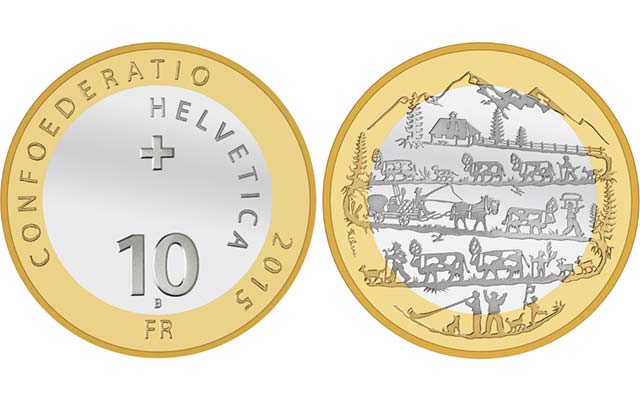 The design tells the story without any help from words or numbers. This 2015 Swiss coin celebrates “Alpabfahrt,” the annual Alpine descent of the cattle, a time for celebration in many communities. 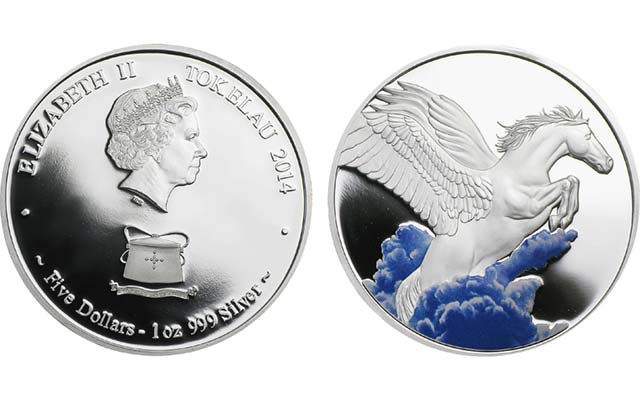 In 2014, Tokelau issued a pair of muted coins celebrating two mythical horse-like animals, the unicorn (not shown) and the pegasus. Collectors can buy them in a number of finishes including mint-colored and gilded. 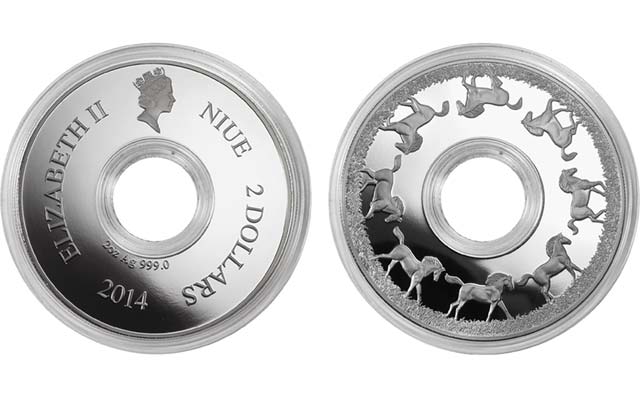 Like an old-fashioned filmstrip, the step-by-step images of a galloping horse ring the entire 2014 Niue coin, made for the Year of the Horse. 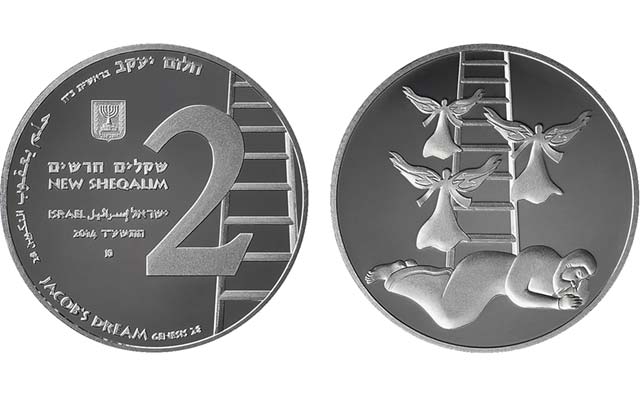 The 19th design in a series called “Biblical Art,” this muted 2014 Jacob’s Dream coin from Israel was produced in both gold and silver. 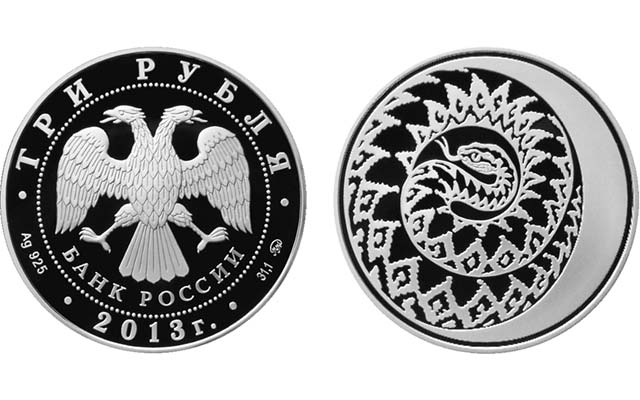 Taking full advantage of the round shape of the coin, this muted 2013 Russian Year of the Snake issue shows a coiled snake, placed off-center. 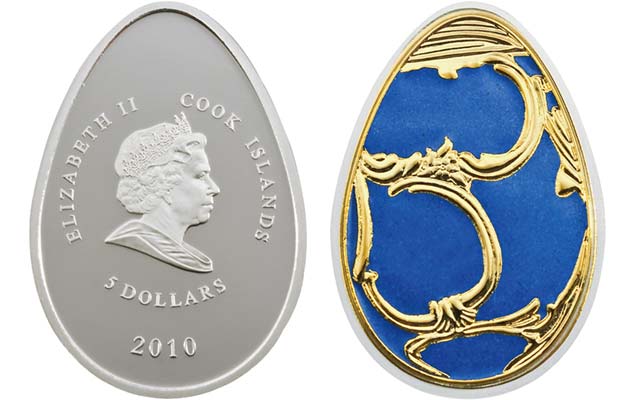 For the last five years, the Cook Islands has been commemorating famous Russian Faberge enameled eggs by issuing some of the egg designs in coin form. Not only the design but also the shape of the coin tells the story. 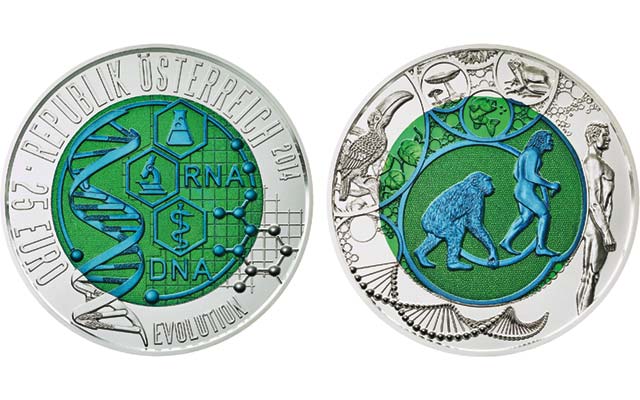 How do you tell the story of man’s evolution without words or numbers? The Austrian Mint did it in 2014, and created the world’s first bi-colored niobium coin at the same time. 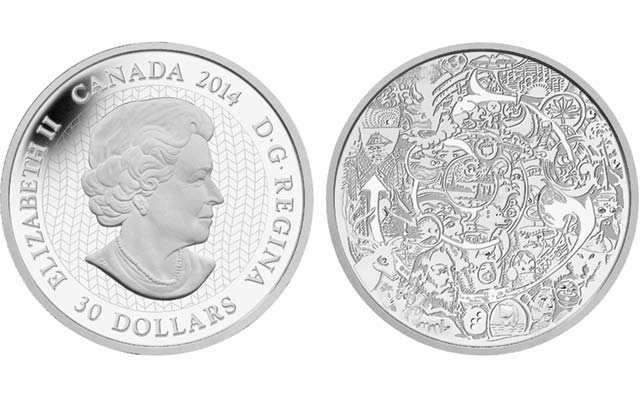 This 2014 Canadian 2-ounce silver $30 coin from the Royal Canadian Mint is muted, but with a twist. Secretly hidden within the art are the initials of the Canadian provinces and territories. Can you spot any of them?

The James Dean of world coins, the muted coin, is the hottest new trend in commemorative design.

Coins typically have the nation name on one side and the date and denomination on the other. These rule-breakers place all words and numbers on the obverse and edge and nothing on the reverse. The picture tells 100 percent of the story, an option once traditionally limited to art medals.

These silent coins speak to the art lover in us. Without the distraction of words and numbers, the coins looks more like miniature metal canvases. This works even with ringed-bimetallic coins.

A Swiss 10-franc coin issued in 2015 weaves a tale back and forth across the surface of the coin. The reverse depicts one of Switzerland’s most important cultural traditions, “Alpabfahrt,” celebrating the return of cattle from the Alpine pastures at the end of summer.

On the day of their descent, the cattle are decorated with flowers, flags, and cow bells. The event is accompanied with town fairs full of folk music, Alpine horn blowing, whip-cracking demonstrations, and the consummation of Alpine cheese.

Muted coins may have complex designs like the Swiss coin or a single centered design element.

In 2014 the Tokelau Islands celebrated “Creatures of Myth and Legend” with a Unicorn and Pegasus 1-ounce silver commemorative pair. Even though only two mythical horse-like animals were feted, Tokelau issued multiple versions of each to add drama and depth to the muted reverses, including mint-colored, gilded, Frosted Proof, Reverse Proof, and an antiqued silver finish.

And then there is the singular element that is repeated.

If you are of a certain age, you might remember something called the filmstrip from your school days, made up of many consecutive photographic slides spliced together.

If you took a filmstrip of a galloping horse and applied it to a coin, you’d have something like the muted $2 coin that Niue issued in 2014. Created for the Chinese Lunar Year of the Horse, the donut-shaped 2-ounce silver coin has a reverse made up entirely of a series of images showing the motion of a running horse, step by step.

Israel has created a multi-year muted coin series honoring “Biblical Art.” The 19th and latest issue is the 2014 Jacob’s Dream coin issued in gold and silver in 1-, 2-, and 10-new-Israeli-sheqel denominations. The series began in 1994 with The Binding of Isaac coin making the Israel Mint one of the first to produce muted coins.

With a scale pattern looking more like a diamondback rattlesnake than any Russian species, the detailed snake is coiled. This is perfect for a coin’s shape, and placing it off-center is highly artistic.

Since 2010 the Cook Islands has been issuing a coin series dedicated to Faberge eggs. The egg-shaped brightly enameled silver $5 coins are all mute designs, except for one 2013 egg that has Roman numerals in the design. Some of the coins have raised designs that feature leaves, vines and small crystals, just like the Russian eggs they commemorate.

How do you depict a complex scientific theory without the use of words or numbers?

The Austrian Mint found a way in 2014 with its muted Evolution ringed-bimetallic silver and niobium €25 coin. The design makes good use of the outer ring of silver while the eye is drawn to the colorful blue and green niobium core. In addition to being a muted and ringed-bimetallic piece, this is the first coin ever produced with two colors of niobium, created as the result of an oxidation process.

Also in 2014, Canada issued the second coin in its series about contemporary Canadian art. The busy miniature mural landscape with more than 50 images is Canada through the eyes of native son artist Tim Barnard. The $30 coin contains 2 ounces of silver.

While at first glance the Canadian coin appears to be muted, there might need to be a new category for this coin, perhaps called the muted puzzle. Cleverly disguised within the design are initials of each Canadian province and territory.

Can you spot any of them?

Commemorative coins of the world have borrowed a lot from the anything-goes world of medals lately. Coins are made in high relief, in super sizes and nonround shapes, and are mint-colored and imbedded with all kinds of objects and relics, from stained glass to jewels. The muted coin is another new type that appears to be here to stay.