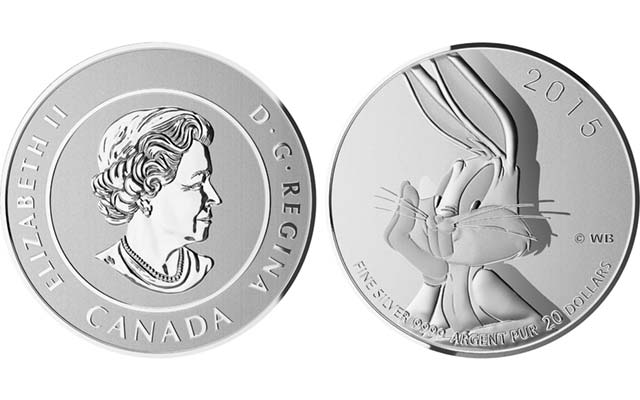 Bugs Bunny is celebrated on a new silver $20 coin from Canada to mark his 75th “birth” anniversary. 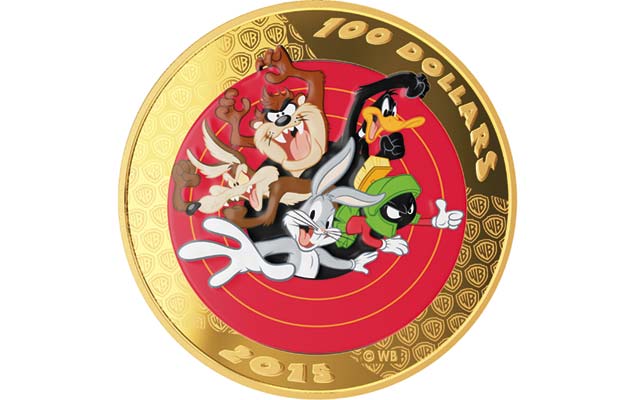 A Proof .583 fine gold $100 coin from Canada with a colorful display recalls the closing scene of each cartoon. 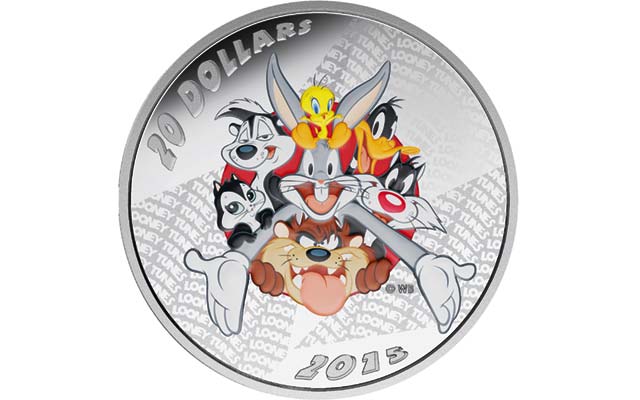 A Proof silver $20 coin showing Looney Tunes characters is available, and comes packaged in a wooden ACME crate that was a recurring sight gag in the cartoons.

Collectors of Franklin half dollars have long known of so-called “Bugs Bunny” coins.

Now, thanks to the Royal Canadian Mint, the harebrained hare gets his own silver $20 coin.

Unlike the American clashed die minting variety that makes Benjamin Franklin’s teeth resemble the cartoon character, the Canadian Bugs Bunny appears intentionally. The $20 coin is being sold at face value as part of a broad program to honor the rabbit’s 75th anniversary.

Several Looney Tunes collector coins will be issued by the RCM through the end of 2015.

A $20 “Merrie Melodies” silver coin features Bugs Bunny and friends in a design reminiscent of the Looney Tunes’ end credits. This coin is packaged in a box that mimics the ACME crate that was a recurring sight gag in the cartoons.

A Proof Bugs Bunny and Friends .583 fine gold $100 coin brings together several famous characters from the Looney Tunes. This coin is accompanied by an exclusive Looney Tunes pocket watch.

Kilogram silver $250 and gold $2,500 coins share a design depicting every major character in the Looney Tunes pantheon, featuring colored enamel selectively applied by hand to the image of Bugs Bunny, who is surrounded by the cast of characters.