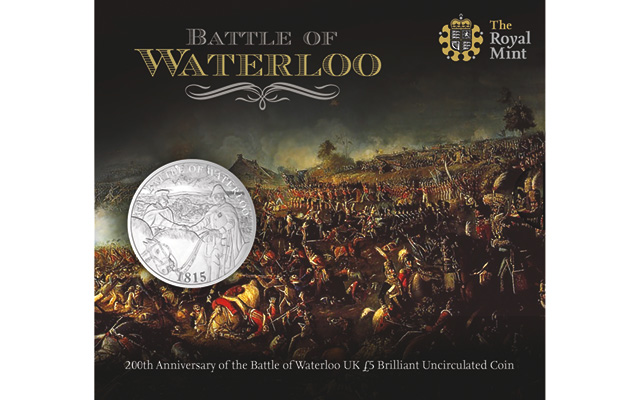 The Royal Mint marks the bicentennial of the Battle of Waterloo on a 2015 £5 coin. The Brilliant Uncirculated coin comes packaged in a colorful cardboard folder. 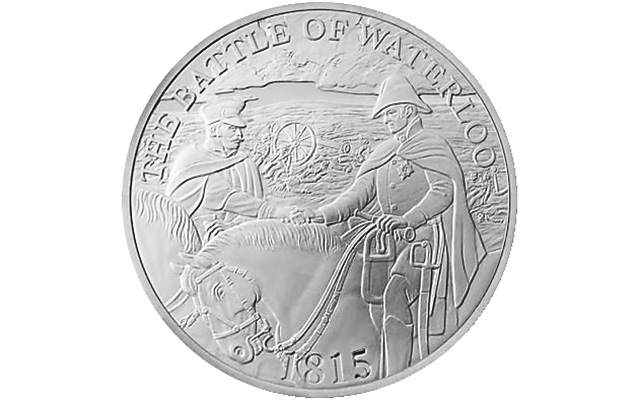 The Royal Mint marks the bicentennial of the Battle of Waterloo on a 2015 £5 coin. The reverse shows Britain’s Duke of Wellington and Gen. Gebhart Blücher from Prussia on the battlefield.

In 1815, French emperor Napoleon Bonaparte was defeated at the Battle of Waterloo by allied forces led by Britain’s Duke of Wellington and Gen. Gebhart Blücher from Prussia.

The victory ended Bonaparte’s designs on domination of Europe.

The Royal Mint marks the 200th anniversary of the Battle of Waterloo with a 2015 £5 coin.

The battle brought more than 20 years of conflict in Europe to an end, and began almost 100 years of peace.

Sculptor, designer, artist and illustrator David Lawrence captures the alliance between Wellington and Blücher on the reverse of the coin, as the two military tacticians shake hands while mounted on horses on the battlefield. A cannon in the background reflects the war technology of the time.

The obverse of the coin depicts the Ian Rank-Broadley effigy of Queen Elizabeth II, which is to be replaced in 2015.

The Royal Mint has begun selling Brilliant Uncirculated copper-nickel examples of the coin.

The BU version weighs 28.28 grams and measures 38.61 grams in diameter. It has an unlimited mintage. The coin is packaged in a colorful, descriptive card and retails for £13. Proof and precious metal versions are available in a range of annual collector sets, with additional versions to be issued in the coming months.