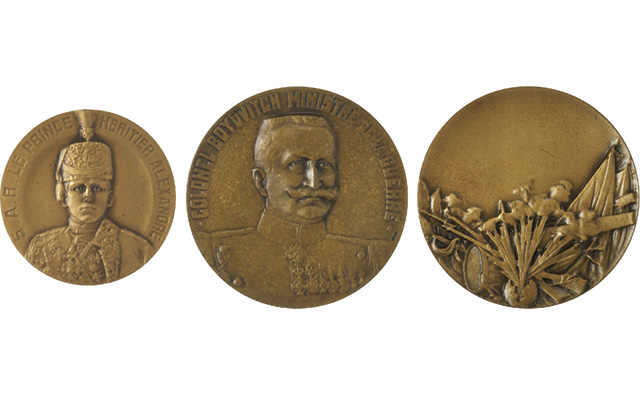 There are no accessible Serbian medals from the start of the First World War, only Serb subjects, Prince Alexander and Field Marshal Petar Bojovic,with common reverse, struck for sale by Huguenin Freres.

The assassination of Austrian Heir Presumptive Archduke Franz Ferdinand in Sarajevo by Serbian terrorists precipitated World War I. Austria blamed the Kingdom of Serbia, which had effectively doubled in size in the First and Second Balkan Wars of 1912. Austria’s ultimatum to Serbia after the assassination cited the secret society Black Hand for arming and training terrorists inside the Austrian dominions.

This shadowy group had infiltrated the government, army, cabinet, and even the Serbian royal family headed by the aged King Peter I Karageorgevic and his son, Crown Prince Alexander. The group’s nationalists dreamed of even greater expansion, hoping to annex Bosnia and Herzegovina and to detach Croatia and Slovenia from the Austrian Empire.

Collectors know of the flood of medals that greeted the world war in Austria, Germany and France. Serbia was one of the first nations involved, but had neither mint nor private facilities for medal manufacture. The only medals on Serb subjects that collectors were likely to find in 1914 were struck by the private firm of Huguenin Fréres in Le Locle, Switzerland.

These were commercial issues with portrait obverses and a common stereotype reverse showing an exploding bomb with a trophy of arms and banners on a blank field. One is a 40-millimeter bronze piece inscribed S.A.R. LE PRINCE HERITIER ALEXANDRE, His Royal Highness Crown Prince Alexander.

It portrays, as a full-facing uniformed bust and wearing a sheepskin shako with tall plume, one of the only Serb leaders likely to be recognized in Western Europe. Born in 1888 to the exiled Karageorgevic family, this prince lived in exile until 1903, returning to Serbia after the brutal murder of King Alexander Obrenovic. His older brother Prince George renounced rights to the throne in 1909, in a murky intrigue involving the Black Hand.

After terrible sufferings of the Serbian people and army in the war, Serbia became the Kingdom of Serbs, Croats and Slovenes in December 1918, rechristened Yugoslavia in 1929. Alexander became king in 1921, and was assassinated in Marseilles during a state visit to France in October 1934.