The Avengers aren't in theaters until May, but are now on coins 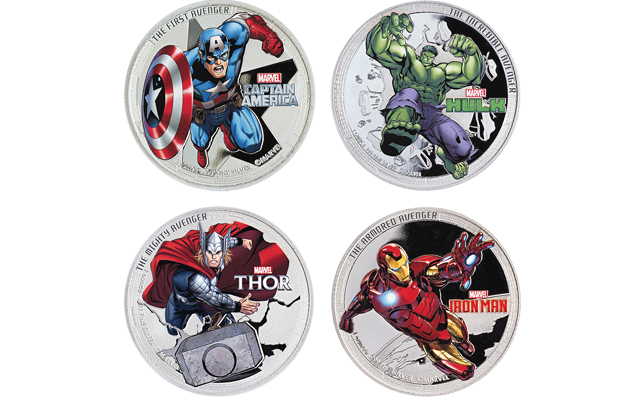 Four 2014 coins from Niue feature characters from the Avengers, from left to right, top to bottom: Captain America, Hulk, Thor and Iron Man. 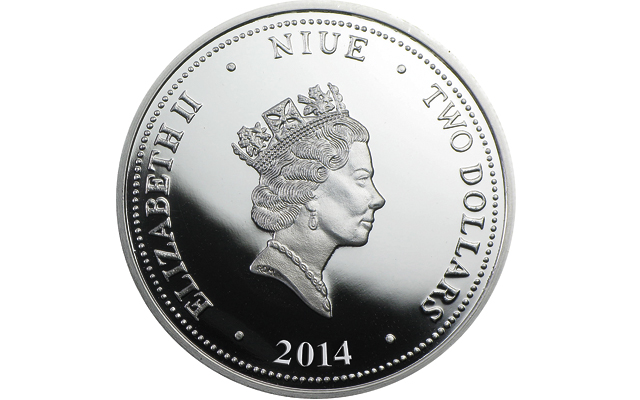 The common obverse of the coins carry the Raphael Maklouf effigy of Queen Elizabeth II. 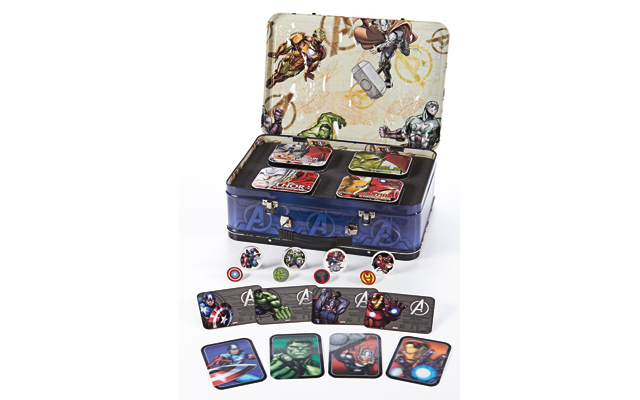 The four-coin Avengers set is packaged inside an oversized "lunch box" with each coin individually packaged inside a metal tin with a colorful character card and a metal certificate of authenticity, among other items.

Comic book characters have been dominating Hollywood in recent years. The same could be said for world collector coins.

The Avengers characters at the center of the a comic book and movie franchise created by Stan Lee and Marvel Comics, are now the subject of four 2014 coins.

The Proof .999 fine silver $2 coins from Niue are being issued exclusively through American Precious Metals Exchange. They were licensed through Marvel and struck at the Sunshine Mint in Idaho.

The coins arrive months ahead of The Avengers: Age of Ultron movie that is set to debut on the silver screen on May 1, 2015.

Captain America, the Hulk, Thor and Iron Man appear separately on the reverse of these new coins.

The obverse of the coins carry the Raphael Maklouf effigy of Queen Elizabeth II.

Captain America debuted in March 1941 and was popular during World War II.

The Incredible Hulk, and his alter ego Bruce Banner, first appeared in The Incredible Hulk #1, published by Marvel Comics in May 1962. A brilliant scientist, Banner transforms into the Hulk, possessing near limitless superhuman strength, when angered or emotionally stressed.

Based on the Norse mythological deity of the same name, Thor is the Asgardian god of thunder and possesses the enchanted hammer Mjolnir. The character first appeared in Journey into Mystery #83 (August 1962).

Wounded, captured and forced to build a weapon by his enemies, billionaire industrialist Tony Stark instead created an advanced suit of armor to save his life and escape captivity. Tony uses his money and intelligence to make the world a safer, better place as Iron Man. The character made his first appearance in Tales of Suspense #39 (March 1963).

The coins are available individually or in a four-coin set, with a total mintage per design of 3,500 pieces, regardless of sales option.

All coins comes with a colorful, three-dimensional character biography card, a certificate of authenticity diecut from stainless steel and a lapel pin.

Each coin comes in a small graphic tin box depicting various Avengers around the edge. The set of four coins is packaged inside an oversized “lunchbox” with colorful depictions of the Avengers characters.

Three of the individual coins retail for $99.99 each from APMEX, with the Captain America coin priced at $20 more.

As with all items sold by APMEX, the price varies depending on payment method.

To order the four-coin set, visit a special page at the firm’s website.

The Captain America coin can be found here, with the Hulk coin available here.