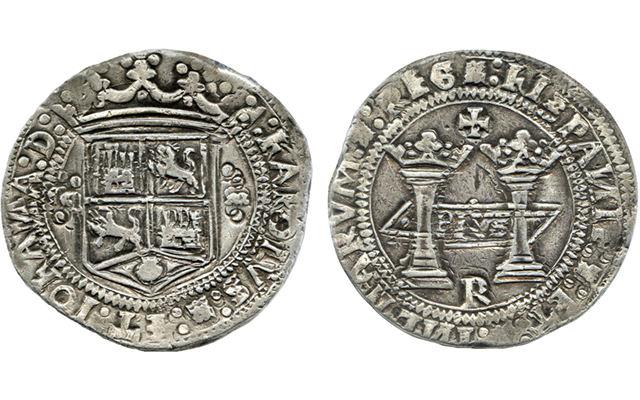 One of three examples of the earliest silver dollar in North America realized $587,500 during Daniel Frank Sedwick’s Nov. 6 auction in Orlando.

The anonymous buyer was bidding from the floor. According to Agustin Garcia-Barneche, the vice president of the Sedwick auction firm, the buyer “is a very sophisticated collector of Latin American coins, specifically of the colonial period. This will always be the star of his collection.”

The example Sedwick offered weighs a full 27 grams and, as customary for the hand-struck 8-real coins, is not perfectly round.

All three known examples of the coin were struck at the Mexico City Mint under Francisco del Rincón, the facility’s first assayer, just two years after the mint opened as the first in the Americas.

In the early 1990s, these coins were discovered in a chest of 2,000 coins from a circa 1550s Caribbean shipwreck, according to Daniel Frank Sedwick, the company president. The discovery provided physical evidence of the early issues, which had previously been reported in documents transcribed by researcher Alberto Pradeau in 1947 and supplemented in 1955 by Robert I. Nesmith.

The reverse of the coin bears the Pillars of Hercules with a banner that shows the inscription PLVS VLTRA (meaning “more beyond”), signifying the entrance to the Mediterranean. A Maltese cross appears at the top, and an initial R for the assayer is at the bottom. The various design elements are all contained inside an encircling legend stating the rulers’ territories.

The auction was the first public offering of this example.

Garcia drew several parallels between the early Mexican 8-real coin and the American silver dollar, noting that the 1794 Flowing Hair dollar (which weighs 26.96 grams) was based on the Spanish colonial 8-real pieces like those struck at the Mexico City Mint and elsewhere in Spain and the New World for some 300 years.

This was the firm’s second live floor auction and 16th live auction overall. Between 50 and 75 people were in the room for bidding, and video and audio feeds gave remote attendees extra insight into what was happening and added interest, according to the firm.

Prices realized, including the buyer’s fees, surpassed the $2 million mark, and many lots sold for record prices, according to Garcia.

For results from the auction, visit the company’s website.