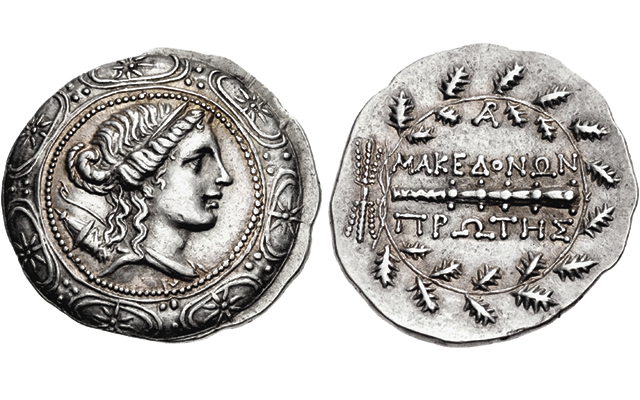 This tetradrachm struck in Macedon under Roman rule, circa 167 to 148 B.C., shows the goddess Artemis on its shield. The reverse shows a club in an oak wreath. 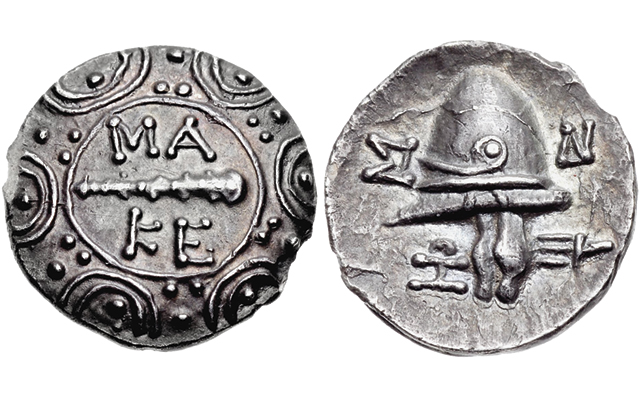 Some Macedonian silver tetrobols of the period circa 187 to 168 B.C. depict a shield with a club and the inscription MAKE (representing Macedon), and a helmet on the reverse. 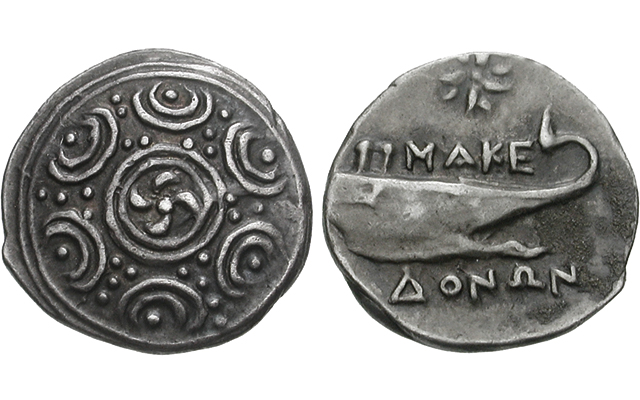 This silver tetrobol of circa 187 to 168 B.C. shows a Macedonian shield with a “whirl” in its center. Its reverse shows the stern of a war galley. 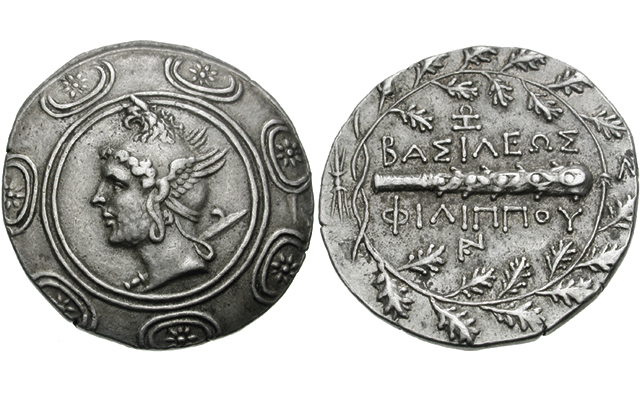 This silver tetradrachm of King Philip V (221 to 179 B.C.) bears on its shield the portrait of the king as the hero Perseus. The reverse shows a club in an oak wreath. 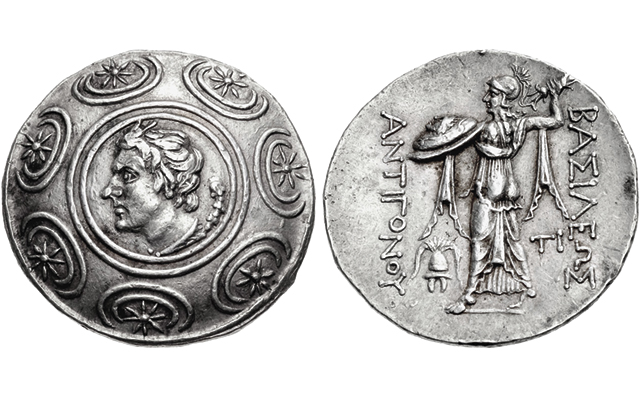 The head of the god Pan adorns the Macedonian shield on this tetradrachm of King Antigonus II Gonatas (circa 277 to 239 B.C.). The reverse shows Athena advancing.

Shields were an essential tool of war in the ancient world. They came in many sizes, ranging from small bucklers strapped to a soldier’s arm to heavy, oblong shields the height of an infantryman’s body.

They were made in many shapes and were decorated with a wide variety of designs. Shields were depicted frequently enough on ancient coins that they now constitute a collecting theme all their own.

The standard shield for the Macedonian army of Alexander III, “the Great” (336 to 323 B.C.), was light and round. It usually is represented on coins as having a central tondo (circular work of art) with a design element surrounded by a concentric pattern of what appear to have been smaller shield devices, usually numbering five to seven, each with a star or a pellet in its center. Because these design elements in the periphery fade with the curvature of the shield, they often resemble crescents rather than circular decorations.

The small version of this shield, used by pikemen, was usually about 24 inches in diameter, whereas hoplites (spearmen) carried larger shields that typically measured about 34 inches across.

Macedonian shields were depicted on coins of various kingdoms and cities. Not surprisingly, they most often occur on issues of the Kingdom of Macedon. Though the design of the periphery of the shield is fairly consistent, what appears on the tondo in the center is open to much variety.

Four major issues of Macedonian silver tetradrachms use the shield as an obverse type. The earliest is attributed to King Antigonus II Gonatas (277 to 239 B.C.), who placed the head of the god Pan in the center of the shield. Pan wears goat horns and a goat skin, and has his hunting stick, a lagobolon, at his shoulder.

The later Macedonian king Philip V (221 to 179 B.C.) decorated the center of his shield with the head of the hero Perseus, who has at his shoulder a distinctively shaped knife called a harpa. Some of these portraits represent only the hero, whereas others are vivid and lifelike enough to suggest that they are portraits of the king.

Finally, on some silver tetradrachms struck after Macedon had succumbed to Roman rule, the shields have in their center the draped bust of the goddess Artemis with a bow and quiver at her shoulder.

The first of these, attributed to the period circa 167 to 148 B.C., was struck in very large quantities, whereas the second, apparently struck circa 148 to 147 B.C., is quite rare and may have been issued when a Roman embassy arrived in the wake of a rebellion.

The Macedonian shield was also used as the obverse type for Macedonian silver tetrobols thought to have been struck from the 180s to the 160s B.C. by the Macedonian kings Philip V and Persus (179 to 168 B.C.).

One tetrobol has on its tondo a knotted club, sometimes alone, but usually bisecting the national inscription MAKE (abbreviating MAKE?ONON). The other has a “whirl” design comprising a pellet from which four or six curved rays emanate.

The “whirl” was also used on silver coins of the Macedonian city Bottiaei and on small bronzes of the kings Alexander III and Philip V. It seemingly is an adaptation of the star or sunburst design that appeared so commonly on shields carried by Macedonian soldiers.

The greatest variety of Macedonian shields, however, appears on bronze coins of the Macedonian kings. Most are of the “half-unit” denomination struck for Alexander III or his immediate successors, though some are quarter-units. They almost always show on their reverse a crested helmet of an equally distinctive Macedonian type.

Some central designs on these bronzes are simple, such as a pellet within concentric circles, a star or a “whirl” design. The rest are more interesting, and include a lighted torch, a club, a double-headed axe, a thunderbolt and a caduceus (the wand of Hermes comprising two snakes entwined around a staff).

The most common variety of these bronzes may be the most visually appealing. It shows in the center of the shield the aegis, a protective amulet of Athena and Zeus comprising the head of Medusa set upon a scaly goatskin.

It was a fearsome image, powerful enough during the Trojan War to have driven the Greeks back to their ships as the god Apollo retrieved the wounded hero Hector. Greek kings often used this image in hopes of gaining protection and promoting their legitimacy.

Another attractive type shows on the tondo the three-quarters-facing head of the hero Heracles (Hercules) wearing the scalp of the Nemean lion. Yet another shows a monogram representing Macedon or the name of a king.

The shield was also used as a coin design by four Seleucid kings of Syria, as the rulers of this kingdom descended from Macedonian royalty.

The Seleucid bronzes show on their obverse a Macedonian shield that often is decorated with a gorgon or an anchor.

On one rare series of bronzes struck in the 160s B.C. at Alexandria by Issus (Alexandretta), a city near Antioch, Syria, the tondo bears the head of the King Antiochus IV (175 to 164 B.C.) wearing a radiate crown.

Perhaps the most imaginative of all Macedonian shield design types, however, occurs on small bronzes that appear to have been struck at Mylasa, a city in the region of Caria in southeastern Asia Minor. They show on their reverse a sword in its sheath and on their obverse three Macedonian shields with spearheads piled upon one another in a most pleasing composition.

Since these coins of Mylasa bear the name Eupolemus, they perhaps were struck by an officer of that name who in circa 315 or 314 B.C. fought in Caria on behalf of the Macedonian King Cassander (316 to 298 or 297 B.C.). If true, it is easy to understand why this distinctively Macedonian imagery was used, albeit in an innovative way.