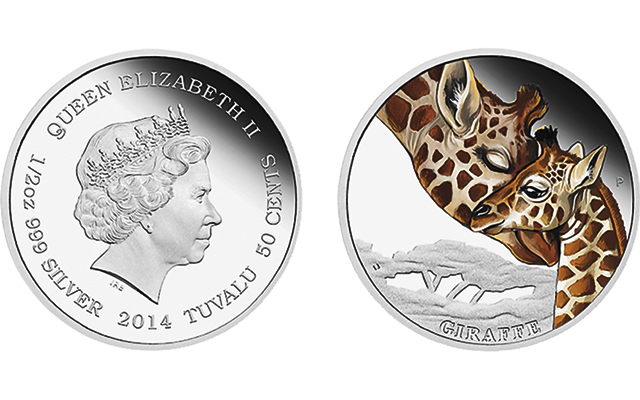 A mother giraffe nuzzles her calf on the new colorful 50-cent coin from Tuvalu issued by the Perth Mint. The coin is the third in the Mother’s Love series.

A mother giraffe and her calf are celebrated on the newest coin from the Perth Mint’s Mother’s Love series.

The new Proof .999 fine silver 50-cent coin from Tuvalu was released June 3 (June 2 in North America). The piece is the third coin in the series.

The coin’s reverse features a colored giraffe calf being nuzzled by its mother in the savannah. The inscription GIRAFFE and the Perth Mint’s P Mint mark also appear in the design, which was created by Perth Mint designer Ing Ing Jong.

The coin’s obverse depicts the Ian Rank-Broadley effigy of Queen Elizabeth II, 2014 and the denomination.

According to the Perth Mint, the bond that a mother giraffe shares with her calf is unique among adult giraffes. “To guard her young, a mother giraffe will gather with other females and their calves in nursery herds.”

By keeping the infant animals together and moving across open spaces, the adult females can more easily observe the group and detect approaching predators. If a calf is at risk of danger, the mother will stand over her offspring and without hesitation harshly kick any animal that gets too close.

The half-ounce coin measures 36.6 millimeters in diameter and is limited to a mintage of 6,000 pieces, with 4,500 designated for individual sales (plans for the balance have not been disclosed).

The coins are accompanied by a numbered certificated of authenticity.

The Giraffe coin follows the release of earlier coins honoring the lioness and the Asian elephant. The remaining themes for the five-coin series are the brown bear and the orangutan.

The coins retail for $63.50 in Australian funds.

Distributor Talisman Coins offers the coin to collectors in North America for $49.95 in U.S. funds, with quantity discounts available. Purchase prices for quantities of five to nine coins are $48.95 each, and for 10 or more, $47.95 each.