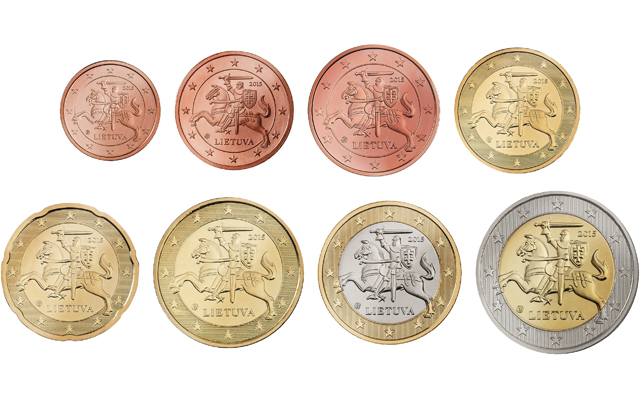 Lithuania’s coat of arms, known as the Vytis, will appear on the national side of Lithuania’s euro coinage when it adopts the currency Jan. 1, 2015. All eight denominations are seen here in relative size, from cent to €2 piece, left to right and top to bottom.

Image courtesy of the Bank of Lithuania.

Eight years after it first hoped to adopt the multinational currency, Lithuania has met the strict financial criteria for joining the currency union, reported the European Central Bank, the European Commission and the Bank of Lithuania June 4.

Formal approval will have to take place over the next month, as several committees, agencies and councils review the plans for Lithuania to become the 19th member of the eurozone. The Council of the European Union is expected to make the final decision July 23.

Initial demand for the first Lithuanian euro coins is set at “around” 370 million pieces, with mass production of the coins planned for the end of summer, according to the Bank of Lithuania. The state-run Lithuanian Mint in Vilnius has already produced samples of the coins and will later strike the coins for circulation.

Lithuania was among a swath of Europe that joined the European Union Jan. 1, 2004, and had initially planned to adopt the euro three years later, in 2007. Those plans were derailed by inflation, and later by the stagnant world economy.

Lithuania’s new coin designs, then, aren’t all that new — the national bank announced the winners of a design contest back on Nov. 8, 2005, or more than nine years before the designs will actually appear in circulation.

Euro coins issued by Lithuania will bear the symbol of the Lithuanian coat of arms, the Vytis, or “the knight,” which is believed to have been first used as the state emblem in 1366.

The Lithuanian coat of arms comprises a heraldic shield with a red field featuring a left-charging armored knight on a white horse. The knight holds a silver sword in his right hand, while a blue shield with a gold double cross hangs from his left shoulder.

The design theme was mandatory, and sculptor Antanas Zukauskas won the contest.

All designs bear 12 stars (representing the original euro-issuing nations) and the date 2007.

Lithuania, like most countries using the euro, will issue three subsets of coins sharing common designs. The 1-euro and €2 coins show the Vytis set against a background of vertical lines, while the design for the 10-, 20- and 50-cent coins is set against a horizontally lined background. A plain background is used for the design on the 1-, 2- and 5-cent coins.

As is customary, the national bank will issue euro starter kits at face value, in this case 900,000 kits for the public containing 11.59 euros worth of coins. The kit will contain 23 coins, three each of all denominations except the 5-cent coin, of which there are two.

The kits will be released Dec. 1.

The Bank of Lithuania has also projected to issue 35,000 Brilliant Uncirculated and 7,000 Proof sets of the new coins, but no release date has been set.