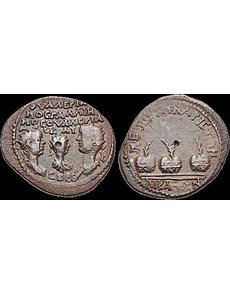 This Roman bronze coin of Nicaea in Bithynia, circa A.D. 256 to 258, shows a family dynasty: the grandfather Valerian I, his son and co-emperor, Gallienus, and his grandson, Valerian II. 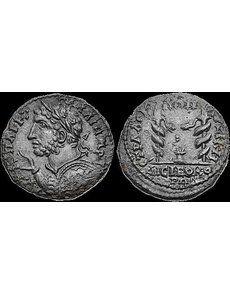 Roman Provincial coinage of Gallienus was generally crude. This bronze of Cyzicus in Mysia bears an ornate portrait that is made delightful because of its folksy execution. 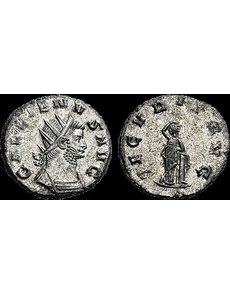 This billon double-denarius (antoninianus) from late in the reign of Gallienus is of poor style and low silver quality. Its reverse shows the personification of Security. 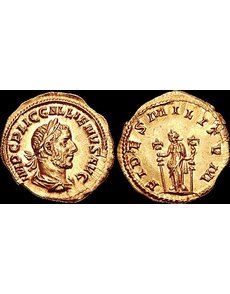 Struck in A.D. 253 to 254, this gold aureus belongs to Gallienus’ first emission of coinage at Rome. The fine-style portrait of the gold coin is of similar quality to the work of earlier years.

Some of the most distinctive coins of the third century A.D. were issued by the Roman Emperor Gallienus, a resilient and remarkable man who reigned from 253 to 268.

Though he faced grave challenges during one of the most chaotic eras of Roman history, he was a cultured emperor who ushered in a revival of the arts known as the Gallienic Renaissance, and who counted among his friends the Neoplatonic philosopher Plotinus.

Later chroniclers faulted Gallienus for the horrible events of his times, mainly because of his father’s anti-Christian policies and Gallienus’ own appreciation for Greek philosophy. Indeed, he was so devoted to pagan religious practices that he was initiated into the Eleusinian Mysteries.

The Roman Empire already was in serious decline when Gallienus’ father, Valerian I, was hailed emperor in the summer or fall of A.D. 253. The era was so chaotic that every one of the 16 men and boys who had been hailed emperor by the Senate during the previous 36 years had earned the title under desperate circumstances — usually a revolt against the reigning emperor.

Valerian had become emperor after defeating Aemilian, a man who three months earlier had rebelled against the emperor Trebonianus Gallus (251 to 253). Gallus had become emperor only because his predecessor, Trajan Decius (249 to 251), and perhaps 25,000 of Decius’ soldiers, had perished in a marsh after being ambushed by Goths.

The crisis that Valerian faced was empire-wide, from the English Channel to the Euphrates River and the deserts of North Africa. Thus, he quickly enlisted his son, Gallienus, as co-emperor. Valerian marched eastward, in hopes of restoring Roman territories that in the previous year had been invaded by Sasanian armies. Meanwhile, Gallienus remained in the West, defending the Rhine and Danube borders from Germanic invasions.

The earliest coins of Valerian and Gallienus were of comparatively good manufacture, especially the first emission. Silver double-denarii from the start of their reigns contained as much as 22 percent silver — typical for the period. Also, the quality of artistry and production was reasonably good.

The co-emperors tirelessly fought their enemies. Gallienus led regular campaigns on the empire’s northern borders, and was hailed Germanicus (conqueror of the Germans) five times between 253 and 258, before he had to turn his attention to defending Italy from a surprise invasion by Alemanni who had crossed the Rhine.

Valerian was similarly embattled in the East. In addition to dealing with the Sasanians, he had to contend with Goths and Scythians who were making terrifying seaborne raids into Asia Minor. He also had to contend with rebellions and an invisible foe, the plague, which began to cripple the Roman armies.

Sometime between April and June of 260, Valerian and many of his top officers were taken hostage by the Sasanian king, Shapur I, as the Romans were attempting to negotiate a truce on behalf of their plague-stricken army. It was a low-point in Roman history, and a serious blow to the Roman world — especially to Gallienus, who no longer had an imperial colleague.

The void in the East was filled by two high-ranking soldiers, Callistus and Macrianus Senior, who at Antioch hailed the latter’s sons, Macrianus and Quietus, as emperors.

In the West, Gallienus could not effectively respond to his father’s capture and the fresh rebellion, as a devastating invasion of the Western provinces had been launched by the Alemanni and the Franks, who cut their way from the Rhine to Spain. In addition to the destruction that ensued, a rebellion was raised in Gaul in 260 by the governor of Lower Germany, Postumus, who claimed the title of emperor.

Though Gallienus could do little to remedy these crises, perhaps the worst aspect was his loss of family. Not only had his father been taken captive by the Sasanians but two of his sons — both of whom had been hailed Caesar — were killed. The first, Valerian II, died of violence or of the plague in 258 while defending the Danubian territories, and the second, Saloninus, perished while resisting Postumus’ rebellion in Gaul.

All the while, coinage was issued in great quantities at mints throughout the empire, as circumstances permitted. With the passage of time and the decrease in Rome’s fortune, the coinage suffered in equal measure.

Gold was affected in a variety of ways. The idea of regular issuance of gold coins seems to have been abandoned, and we might presume that they were struck only when circumstances demanded and when resources allowed.

Gold coinage fluctuated greatly under Gallienus, to the point where no standards are recognizable. Purity sometimes fell as low as two-thirds (or .667 fine), and the weights vary so greatly that there is no true standard for the aureus or its fractions.

Many of his gold coins weigh less than 1.5 grams, and we might presume they were simply underweight quinarii (half-aurei). Those coins are particularly small when compared to regular aurei, which under Gallienus typically weighed 3.25 to 5.50 grams or more.

Silver was degraded on an even greater scale, for its purity dropped from an already dreadful range between 22 percent and 15 percent, to about 2.5 percent or less. Bronze and copper coinage, produced in reasonable quantity in the early years of Valerian and Gallienus, was seldom struck in the last decade of Gallienus’ reign.

In the provinces, base metal coinage was struck at more than 100 mints, in Greece, northern Greece, the Balkans, Asia Minor, Syria, Phoenicia and Egypt. The most active of these provincial mints was at Alexandria in Egypt, where enormous quantities of billon tetradrachms were struck throughout Gallienus’ 15-year reign.

Gallienus also struck large quantities of coins for both of his ill-fated children, and for his wife, Salonina, a woman of some renown. While co-ruling with his father, Gallienus also produced coins for his mother, Mariniana, who seems to have died before 253 as all of her coins are memorial issues. ¦