Readers ask about Russia and abbreviations 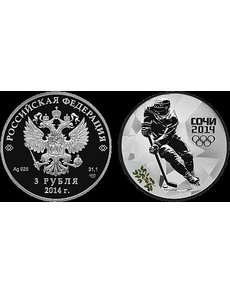 Russia has embarked on a large program to commemorate the 2014 Winter Olympic Games in Sochi, including the Proof .925 fine silver 3-ruble coin for hockey seen here. U.S. distributors have not yet signed on to sell the coins.

I am desperately trying to purchase some of the Russian silver coins for the Sochi 2014 Winter Olympics.

Has a U.S. distributor been named? Thanks very much for any help you can give me!

For the 2014 Winter Games, the Central Bank of Russia and the Russian mints (Moscow and St. Petersburg) have organized a program of at least six circulating base metal coins, 21 silver and 13 gold collector coins, and nine bullion coins in silver or gold.

An issue with Olympic coins is licensing fees. Besides the national organizing committee desiring tribute, any official distributor selling the coins in the United States must also be licensed through the United States Olympic Committee.

That process can dissuade dealers from carrying the coins, whose costs reflect the licensing fees.

Distributors also usually wait to market the coins until nearer the time the Games are held, when attention begins to build, thus compressing the sales window.

Electronic commerce (eBay, for instance) has made licensing strictures less inhibiting, and collectors can often acquire the coins, rightly or not, without going through official channels.

For now, no known distributors are serving the U.S. market.

For Morgan dollars I have seen the acronyms VAM and GSA. Could you explain these terms?

Morgan dollar die varieties, or VAMs, are cataloged in a system originating in a reference by authors Leroy Van Allen and A. George Mallis. The acronym VAM comes from the combined initials of those author’s last names. A reference such as VAM-1A is shorthand for a specific marriage of obverse die and reverse die.

GSA stands for “General Services Administration,” and references silver dollars that were sold to the public by this government organization in the 1970s. The coins were the last of the Treasury Department’s silver dollars, stored in vaults in since the late 19th century.

These coins were encapsulated in distinctive hard plastic holders. When third-party grading came into vogue, many of the coins were broken out of their GSA holders and slabbed in the grading services’ own holders.

Today, though, a resurgence of interest in silver dollars in their original GSA holders has led to premiums for some of the pieces above values for the same coins and die varieties not still in GSA holders. Advertisements and listings for Morgan dollars in Coin World’s U.S. Coin Values that bear the GSA acronym are for those coins still in their original holders.