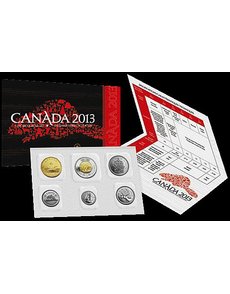 The Royal Canadian Mint has not provided an estimate of how many doubled die coins may exist, but the maximum mintage of Canada’s annual Uncirculated set is 75,000 sets. 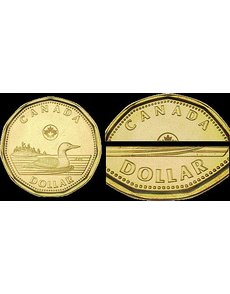 Dollar coins in Canada’s annual Uncirculated collector set have been found with visible doubling on the reverse, representing Class IV Offset Hub Doubling, most visible in the words CANADA and DOLLAR. 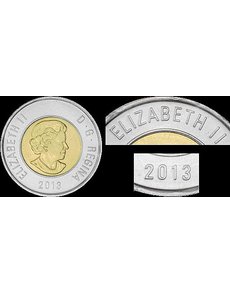 Examples of doubling on the obverse of Canada’s $2 coin have also been discovered in the annual Uncirculated set.

Some collectors who bought Canada’s annual 2013 Uncirculated set are being doubly rewarded with die varieties.

While the coin has not been certified by any grading service, Coin World has physically examined an example of the set containing the error. Coin World News Editor William T. Gibbs identified the Loon dollar as probably showing Class IV Offset Hub Doubling. Coin World’s Varieties Notebook columnist John Wexler agreed with that conclusion, after inspecting a digital image of the coin.

The Loon dollar exhibits doubling that is shifted in the same direction, the identifying characteristic of Class IV Offset Hub Doubling, which means the hub to die alignment was offset to one side. This type of doubling can occur with single-press hubbing, which was first used for Canadian coins in 1978.

Doubling is perhaps most visible in the words CANADA and DOLLAR and the designer’s initials on the reverse of the coin, which displays the standard Loon dollar design by Robert Ralph-Carmichael.

Trees at the water’s edge also exhibit doubling, and doubling is seen at the left wall of the incuse circle in which the maple leaf security device is found.

Wexler initially believed the doubling on the Loon dollar to be mechanical doubling, but closer inspection “shows a strong notching effect on many of the letters. The doubling on the beads near the rim does appear to be raised and rounded as does the doubling on other fine details such as the small trees and the designer’s initials.”

The final initial in the designer’s initials shows very nice separation of images, he added.

Class I doubling, like that on the famous 1955 Lincoln, Doubled Die Obverse cent, would give a notably different appearance than what is seen on the Loon dollar in the set.

Less severe doubling is visible on the $2 coin, especially so in the word ELIZABETH, the year 2013 and the designer’s initials on the shoulder of Susanna Blunt’s effigy of Queen Elizabeth II.

The class of doubling on the $2 coin appears to be the same as on the Loon dollar, Wexler said.

The two coins illustrated with this article are in the same sealed set sold by the Royal Canadian Mint.

Variety collectors and some Canadian collectors first noticed the doubling back in March, based on online collector forum postings.

Cameron Giesbrecht, director of numismatics at Winnipeg’s Gatewest Coins, alerted Coin World on Aug. 16, a few weeks after an unnamed customer of Gatewest tipped him off about the doubling.

Christine Aquino, director of communications at the Royal Canadian Mint, said the RCM was not aware of the doubling on the coins in the Uncirculated sets, though there was a general “understanding that this is a defect that can occur from time to time.”

The RCM has not located the die or dies responsible for striking the doubled coins, and could not provide an estimate of the possible numbers of pieces produced and released.

The set has a maximum mintage of 75,000 sets. Examples of the sets remained available Aug. 29 through the RCM website for the official issue price of $24.95 Canadian.

Examples of the Loon dollar with the doubling have sold through auction site www.ebay.com for between $25 and $30, a price that die variety specialist Wexler noted was “quite a bargain” for such a “major variety.” ¦