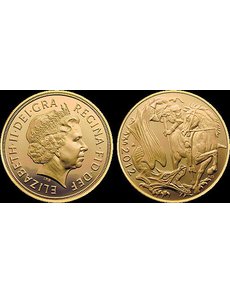 Britain’s gold sovereigns for 2012 sport a new design to commemorate Queen Elizabeth II’s diamond jubilee. The design, by Paul Day, is a fresh interpretation of the famous St. George and Dragon scene associated with the coin since 1817.

To celebrate the diamond jubilee of Queen Elizabeth II, the reverse design of the 2012 gold sovereign will sport a new, modernistic St. George and Dragon design by British sculptor Paul Day.

The Royal Mint revealed the design Oct. 19 for the 2012 gold sovereign, calling it “a new design for one year only.”

The traditional St. George and Dragon design by Benedetto Pistrucci is replaced only for special occasions, having stepped aside for commemorative designs most recently in 2002 for the queen’s golden jubilee. A few tweaks have been made to the design and a special modern design unrelated to any event was used in 2005.

Day won a design contest among five artists to create the “fresh interpretation” of the famous scene, his first coin design.

The reverse shows a ferocious dragon being dispatched by a knight in Gothic armor. Day said he opted for a “romantic version” of the St. George and the Dragon theme, showing a medieval knight of Arthurian legend, “something quite traditional and true to our culture. I have given the dragon a more threatening attitude and size, so that it represents a real menace: its wings have a harp-like quality, in contrast to the realism of the knight and horse, while the lance divides the surface into two.

“I have always been attracted to detail which requires a closer look to be unpicked and fully understood,” Day said. “I have deliberately left very little empty space. This is to make the reverse as engaging as possible and in complete contrast to the obverse.”

The obverse carries the Ian Rank-Broadley effigy of Queen Elizabeth II, which has been in use since 1998.

The design appears on five different versions of the sovereign offered in 2012 — quarter sovereign, half sovereign, sovereign, and £2 and £5 coins.

Only the three smaller sizes will be offered in bullion versions with unlimited mintages, while all five have been offered in Proof versions with varying mintage limits and packaging options.

Though sovereigns have been around since 1489, the modern sovereign, with Pistrucci’s famed design, made its debut in 1817 during the reign of George III.

The quarter sovereign weighs 1.997 grams, measures 13.5 millimeters in diameter and the Proof version has a mintage limit of 10,744 pieces.

The half sovereign weighs 3.994 grams, measures 19.30 millimeters in diameter and the Proof version has a mintage limit of 4,894 pieces.

The sovereign weighs 7.988 grams, measures 22.05 millimeters in diameter and the Proof version has a mintage limit of 8,144 pieces.

In Proof, the quarter sovereign, half sovereign and sovereign are available individually in a deluxe presentation case complete with a numbered certificate of authenticity.

The Royal Mint has destined 6,500 quarter sovereigns for this option, which costs £130 and, as of Nov. 10, was nearly sold out.

Two different three-coin sets were offered but are already sold out.

One set containing an example of each of the three smaller versions, is presented in a wooden display box. This option was limited to 700 sets for £825 each.

Another three-coin set offered the half sovereign, sovereign and double sovereign, also in a wooden display box. This option, limited to 750 sets, was sold for £1,650 each.

A five-coin set is the only way to acquire the £5 coin. Presented in a walnut-veneer case, with an individually numbered certificate of authenticity, the five-coin set is limited to 999 sets and costs £4,000.