$1.4 million may be highest for Roman gold coin 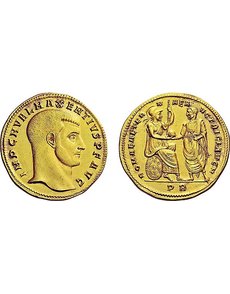 A circa 308 gold medallion of 8 aurei, issued under Maxentius, realized what an auction house said is a new record price for an ancient Roman gold coin.

A rare gold aurei medallion of ancient Rome established what auction officials claim is a new world record price in an April 5 auction.

The circa A.D. 308 8-aureus gold medallion realized a hammer price of $1,407,550 U.S. (1.3 million Swiss francs), what Numismatica Ars Classica, the firm that sold the coin, said is a record price for an ancient Roman gold coin.

The example, in Good Extremely Fine condition, is “by far the finest of only two specimens known,” according to the firm.

The purchaser of the coin was a collector in Switzerland, according to the auction firm.

It does not establish a new record price for Roman coins overall. That record appears to still be held by a circa A.D. 135 bronze sestertius of Hadrian sold in a 2008 auction by Numismatica Genevensis for 2.3 million Swiss francs ($1,900,559 U.S.), including the 15 percent buyer’s fee.

The medallion in the April 5 auction depicts Roman emperor Maxentius, who rose to power at a time the power in the Roman Empire had shifted to the provinces, according to the lot listing.

Maxentius, son of the former emperor Maximianus, wanted to restore the special interests of the capital, and turn back the hand of time to when Rome was a place of privilege, according to the auction house.

His coinage reflected his political platforms, noting his ties to the dynasty founded by his father.

The gold medallion in the auction is among the largest to survive, and was likely part of a cache intended for distribution to Maxentius’ military officers, the firm said.

“High-profile items like this were a perfect medium for reinforcing his ideals among the men who were in the best position to support or to betray him,” according to the catalog.

Maxentius is bareheaded on the obverse, a contrast to his contemporaries, who were shown crowned.

On the reverse, he wears the robes of a senator, and he represents himself as the one charged by Roma herself “to deliver the capital from the degradations threatened by Galerius,” according to the firm.

The inscription on the reverse translates as “to Eternal Rome, guardian of our emperor,” representing how Maxentius presented his case for sustaining the rebellion.

“Every aspect of this must have been carefully considered in the hope that the recipient of this medallion would be assured that Maxentius did not rule as a despot, but humbly, and at the behest of Roma herself,” the firm said.

The medallion was the marquee lot in the second of two different auctions the firm held April 4 and 5.

“Considering the strength of the Swiss Franc against the U.S. dollar and the Euro, auction 59 is the largest sale of ancient coins ever to be held in terms of turnover with some amazing results throughout,” the firm indicated in a statement.