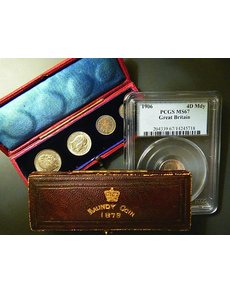 April promises to be a memorable month for the United Kingdom with the wedding of Prince William and Kate Middleton scheduled April 29.

However, a week before that ceremony, another more historic one will occur with Queen Elizabeth II dispensing special silver coins to pensioners to honor their service to community and church.

The ceremony happens on Maundy Thursday, the day before Good Friday. This year the event falls on April 21, which just happens to be the 85th birthday of the queen.

The birth year of the monarch is important on Maundy Thursday because it determines how much money will be dispensed. For instance, last year at Derby Cathedral, the queen gave 84 men and 84 women purses of coins.

This year she will give away coins to 85 women and 85 men.

The tradition of Maundy Thursday is biblical. The name harkens back to the Last Supper when Jesus is said to have washed the feet of the apostles, giving them a “mandatum,” or command to love one another and their neighbors.

In previous centuries, British monarchs used the occasion to pay homage to the poor. As early as 1213, King John gave 13 pence to 13 impoverished subjects. At the time, the number 13 was not unlucky but symbolized Jesus and 12 disciples.

In more recent ceremonies, monarchs have recognized service rather than social state, with subjects not only from the Church of England but from various Christian faiths.

Although Maundy money has been issued for centuries in one form or another, including circulating coinage, the design became more uniform in the early 19th century. The obverse features the reigning monarch and the reverse, a crowned numeral and oak wreath.

Denominations are 1 penny, 2 pence, 3 pence and 4 pence. The penny is particularly intriguing, because of its minuscule size, weighing 0.5 gram and measuring only 11 millimeters in diameter.

These are beautiful, highly collectible coins because of their origin, tradition, small mintages (typically fewer than 2,000 coins) and the coins’ antique packaging.

I own three sets and would buy dozens more, but have to restrict myself because of budget. Sets can be pricey, typically in the low hundreds of dollars, with some sets costing in the thousands, according to year and grade.

My other sets — an 1879 Queen Victoria set and 1902 King Edward VII set — came in antique packaging with velvet inside that typically gives Maundy money rainbow toning.

If you are interested in acquiring a set, you might pick a year that has special meaning to you, perhaps reminding you of something you did in service to others — a military or Peace Corps assignment, say, or an elected or appointed office.

You can select a year for more personal reasons, perhaps associated with love, such as a wedding or birth date.

In fact, you may want to acquire a 2011 Maundy set to mark the April 29 royal wedding or the April 21 Maundy ceremony, a historic event in that it falls on the queen’s birthday.