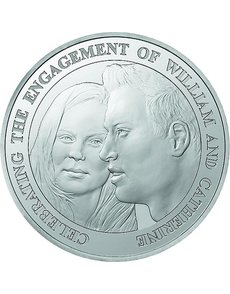 A new £5 coin from Alderney is among four sharing a design marking the royal engagement of Prince William to Catherine “Kate” Middleton. The Proof silver version appears here.

The Royal Mint revealed the designs in announcing the coins’ availability that day at a special page in the Royal Mint’s Web site.

In addition to a Brilliant Uncirculated copper-nickel coin, the Royal Mint is striking three Proof coins: a .925 fine silver version, a gold-plated .925 fine silver coin and a .9167 fine gold coin.

The newly engaged couple appears on the reverse of the coins, surrounded by the legend celebrating the engagement of william and catherine.

Matthew Bonaccorsi designed the reverse, which was inspired by photographs of the couple at a sporting event, according to the Royal Mint.

“The play on the traditional portrait is that Prince William is seen in profile, alluding to his Royal status,” according to a statement from the mint.

Prince William and Queen Elizabeth II approved the coin design, which was revealed just weeks after the engagement was announced to the public on Nov. 16.

The wedding is slated for April 29 at Westminster Abbey.

Alderney is part of the Channel Islands and is a British Crown dependency.

Orders are being accepted now, but delivery of the coins is not expected until mid-January or mid-February.

Mintage limits and type of packaging vary among the versions.

The BU copper-nickel coin has a mintage limit of 100,000 pieces.

Of that total, a maximum of 50,000 BU coins are housed in a specially designed, informative coin folder for £9.99 each.

The silver Proof coin is accompanied by a certificate of authenticity; 15,000 of a total mintage maximum of 25,000 coins are presented in a display case and priced at £55.50.

The gold-plated coin is presented in a deluxe display case, has a sales limit of 5,000 pieces and sells for £85. Royal Mint officials have not announced whether the 5,000-coin sales limit is also the coin’s maximum mintage.

The gold coin’s mintage limit is 1,300 pieces, with 1,000 of the coins allocated for distribution in a deluxe presentation case with a numbered certificate of authenticity for £1,550 each.

Royal Mint officials have not disclosed plans for the remaining numbers of any of the coins beyond what is publicly announced.

Prices for the coins and sets are listed in pounds. The actual price in U.S. or Canadian dollars will fluctuate with the exchange rate; the price will be locked in upon ordering.