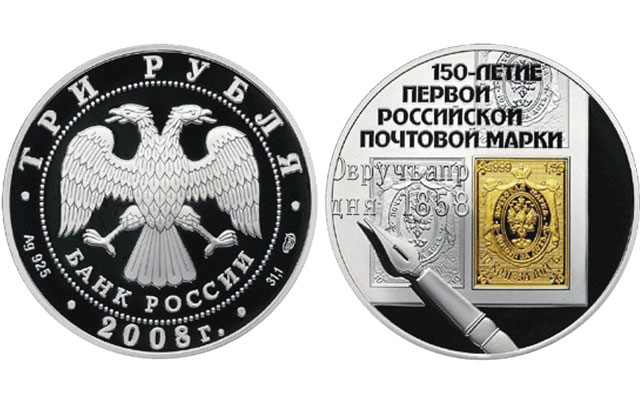 Russia celebrated the 150th anniversary of the first Russian postage stamp with a commemorative coin in 2008.

Editor's note: The following is the fifth piece of a multi-part Coin World series about the intersection of coins and postage stamps prepared by Jeff Starck for the May 2015 monthly edition of Coin World.

The first Russian stamps were issued in December 1857, and they became valid for use as postage on Jan. 1, 1858.

The stamp’s design bears the Russian double-headed eagle (the national coat of arms) along with two crossed horns for the emblem of the Russian Post. The stamp was printed mostly in brown, with the coat of arms printed in blue.

The obverse of the 3-ruble coin features Russia’s two-headed eagle, with the legend translating to “Bank of Russia” appearing below. The interpretation of the eagle on the obverse of the coin and that depicted in the stamps’ design on the reverse differ slightly.

The reverse depicts the corner of a postal envelope with three of the first stamps on it.

The stamp at the lower right on the corner of the cover depicted on the coin is highlighted with a “gold insert” composed of 1.55 grams of .999 fine gold.

An inscription to the left translates to “Delivered in April 1858,” above which appears a legend translating to “150th anniversary of the first Russian postage stamp.”

A stylized depiction of a steel-tipped fountain pen also appears in the lower part of the reverse design.

The coin contains 31.1 grams (1 ounce) of silver, measures 39 millimeters in diameter and has a mintage limit of 8,000 pieces.