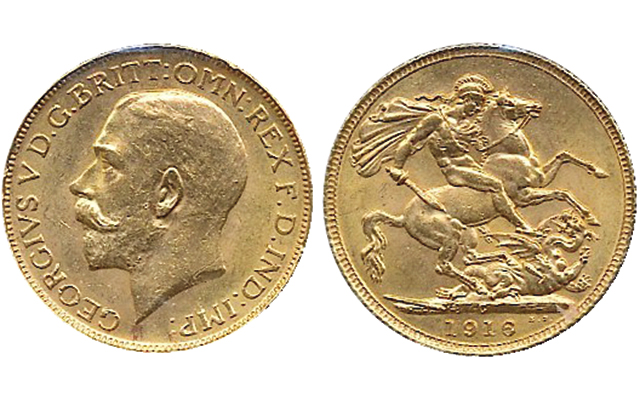 The gold 1916-C £1 sovereign that was struck at the Ottawa Mint, then a branch of the Royal Mint, is graded Mint State 63 by International Coin Certification Service.

It is one of many highlights of the Aug. 13 to Aug. 16 sale, which is being held in Mississaugu, Ontario, in conjunction with the RCNA’s annual convention.

The sovereigns struck at the Ottawa Mint are identical to those struck in London, except for the “C” Mint mark above the date on the reverse.

The example being offered in the RCNA sale has an estimate of $50,000 Canadian.

British gold sovereigns struck at the Ottawa Mint between 1908 and 1919 “occupy a controversial position in Canadian numismatics,” according to W.K. Cross in Canadian Coins, Vol. One, Numismatic Issues 2014 (a catalog commonly called by the name of its publisher, James Charlton). “Some argue that these pieces are Canadian and must be collected as part of the Canadian series, while others claim that they are British and are separate from the decimal series of the Dominion of Canada.”

Because the Ottawa Mint was then a branch mint of the Royal Mint in London, it was obligated to strike sovereigns on request, according to Cross, but demand for the coins in circulation was low.

The 1916-C sovereign is the most elusive for sovereign collectors around the world. About the only thing known about the coin is how many were made.

The number of survivors and the reasons for their scarcity remain unknown to the numismatic community. There is no debate, however, that they are rare and the key to the short series of Ottawa Mint sovereigns. Haxby wrote that “fewer than 10 are known to exist today. Most of the original mintage apparently made its way to the U.S. Treasury where it was eventually melted down.”

The Charlton catalog suggests there are about “50 or so pieces known," an estimate based on a census about 10 years ago of the issues by expert Sandy Campbell of Proof Positive Coins. Campbell’s analysis found no fewer than 29 and no more than 36 existed at the time of Campbell’s calculations.

The rumor isn’t logical, though, because “if there was to be a gold exchange between Canada and England in 1916, the gold needed only be deposited with the New York Federal Reserve for the account of Great Britain, and not subjected to a perilous sea voyage during a time of war,” Cross wrote.

The truth may never be known.