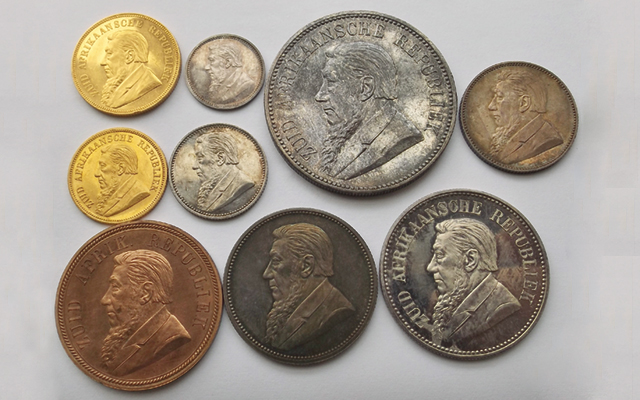 Obverses of the nine coins in an 1892 Proof set from South Africa are seen here. This set, one of 10 known, is in a May 14 and 15 auction in Johannesburg. 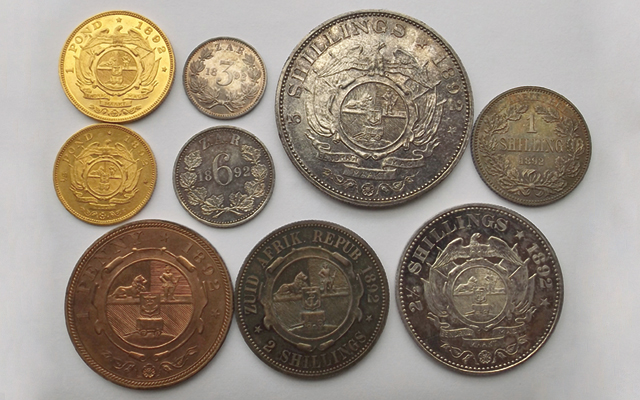 The reverses of the nine coins in an 1892 Proof set from South Africa are seen here. This set, one of 10 known, is in a May 14 and 15 auction in Johannesburg.

The rarest Proof set in South African coinage history is the one issued in 1892.

An example of the set highlights Stephan Welz & Co.’s May 14 and 15 auction in Johannesburg.

Ten complete 1892 Proof sets are known, the auction firm reports, based on research by Brian Hern in Hern’s Handbook on South African Coins and Patterns.

The coins show Paul Kruger, state president of the South African Republic, on the obverse, with most of the coins depicting the coat of arms on the reverse.

Though a mint was being built at Pretoria, Kruger, in the midst a re-election campaign and seeking to boost his profile, contracted with the Berlin Mint to design and produce the South African currency bearing his image, with mintages for many denominations in the thousands.

But in his use of a European mint, Kruger almost jeopardized his fortunes instead.

German designer Otto Schultz created one of the most spectacular unintentional design errors, using a European style wagon on the coat of arms instead of the style typical in South Africa. The wagon on the coins had two shafts, not the single-shaft version that was commonly hitched to a pair of oxen.

The rear wheels on the native Voortrekker wagons also have rear wheels that are larger than the front wheels, but Schultz’s design has wheels of equal size. Schultz’s OS initials (below Kruger’s bust) were also mistaken for the Afrikaaner word for "ox."

The improperly designed coins had to be withdrawn from circulation, and examples with a single shaft wagon were issued in their place.

People kept enough examples of the wrong design that the coins are relatively available today.

The set in the auction is from the Erich Albrecht Hohmann Collection, and all nine coins are “Brilliant Proof,” according to the firm.

The auction will take place at Stephan Welz & Co’s new premises in Mandela Square, Sandton City. More than 1,100 items are in the sale.

A full catalog may be viewed at the firm’s website, ww.stephanwelzandco.co.za, and live bidding is available on www.the-saleroom.com.