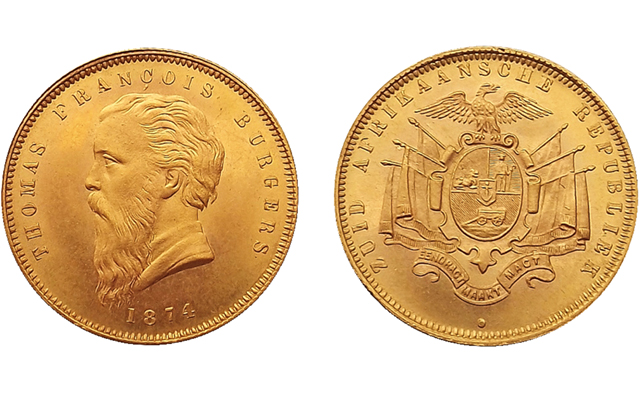 One of the classic rarities of South African coinage history highlights Stephan Welz & Co.’s May 14 and 15 auction in Johannesburg.

Graded Brilliant Uncirculated (according to the auction house), the coin is part of the Erich Albrecht Hohmann Collection. Hohmann’s collection has been with his family since his death in 1972.

The true mintage of the Burgers pond coin may never be known, but experts suggest 837 were made, with most (reportedly 695) of the Fine Beard version; the balance (142) are of the Coarse Beard design. The most observable difference between the two design variants involves the end points of Burgers' beard: the points are coarser on the scarcer version than on the other.

Burgers served as president from 1872 to 1877. While serving in the position, he sought to have a new gold coin made using metal mined in South Africa, so he contacted Ralph Heaton & Sons in Birmingham, England. The private mint commissioned Royal Mint engraver Leonard Wyon to design and prepare the dies.

The obverse of the coins features an image of Burgers, as created by Wyon, and the reverse shows the coat of arms of the fledgling republic.

Burgers supplied the gold specie, mined in the Transvaal.

Once the coins arrived from England, Burgers showed them to members of the Volksraad (Parliament), who quickly objected to the coin, since the legislative body had never been consulted, and also because the coins showed Burgers’ portrait.

While South Africa would adopt the gold pond in 1892, based on the English sovereign, Burgers’ attempt was rejected, and many examples were then sold to the public at twice their metal value, mementoes of the failed experiment. Many were used in jewelry, and few examples are so well preserved. After the Boer War, the coin’s rarity was publicized, and the coin has been a famed South African rarity for a century.

The example in the Welz auction “compares well to a [Mint State] 64 that was recently sold on auction,” according to the auction catalog.

In a Jan. 3, 2012, Heritage Auction, an MS-64 example graded by Professional Coin Grading Service realized $71,875, including the 15 percent buyer’s fee; that appears to be the most recent Fine Beard example of that grade sold at auction.

Savo Tufegdzic, stamp specialist at Stephan Welz & Co., said, “The Gramadoelas book is most probably the largest and rarest collection of autographs ever put up on auction as one single lot.”

A full catalog may be viewed at the firm’s website, www.stephanwelzandco.co.za, and live bidding is available on www.the-saleroom.com.

For more information about the auction, telephone the firm at (011) 27 11 880 3125, email Tufegdzic at savo.tufegdzic@stephanwelzandco.co.za or visit the website.