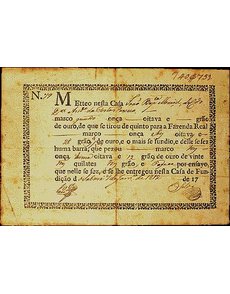 The “guia” or guide was a certificate mandated to accompany the gold ingots, and few have survived the ravages of time. The guia tells when the ingot was made, and how much gold it contains, among other facts. 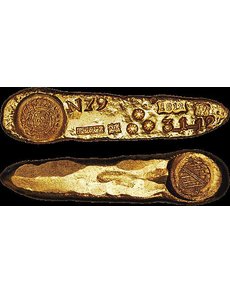 A gold ingot made in Brazil at a foundry in Sabara during the reign of prince regent Joao VI realized $199,750, including the 17.5 percent buyer’s fee, in a late September auction. It is one of 219 known ingots from Brazil’s colonial period still in existence.

An example of one the rarest items in all of South American numismatics, a Brazilian gold ingot made in 1812, led bidding in Heritage Auctions’ world and ancient coins auction Sept. 25 to Oct. 1 in Long Beach, Calif.

Max Keech from Latin American Numismatics and Mexican Coin Co., in Carefree, Ariz., purchased the ingot, according to Heritage. (Keech had not returned Coin World’s inquiry at press time Oct. 9.)

The ingot, produced when the nation was a Portuguese colony, was issued under Joao VI Prince Regent and smelted and stamped at a foundry in Sabara. At the time, in addition to coins, gold ingots and bars circulated in colonial Brazil as legal tender.

The ingot in the Heritage auction was accompanied by its “guia,” or guide, the originally issued certificate that documents the ingot’s creation and records the ingot’s number, owner, purity and weight.

The ingot is one of 85 known from the Sabara foundry, which operated from 1778 to 1833, making it the longest operating producer of ingots in colonial Brazil. Cristiano Bierrenbach, executive vice president of international numismatics at Heritage, estimated that fewer than 15 of the ingots are known for the reign of Joao VI.

The ingots have been compared to the U.S. pioneer gold issues of the California Gold Rush. The Brazilian ingots were issued to monetize new gold into circulating currency and to make sure taxes were paid in the process.

Besides their beauty, collectors appreciate their history as monetary instruments from a 55-year period when gold bars were made from native-mined metals and used in place of coinage and later alongside it.

The ingot sold by Heritage was part of the second offering of the RLM Collection of Brazilian Gold, compiled by Roberto Monteiro.

The ingots, made from natural gold brought in to official refineries for testing, smelting, marking and taxation, were typically sent to Europe where they were again melted.

The Sabara foundry was not the only facility producing ingots in colonial Brazil. Today, an estimated 219 genuine examples of the ingots are known to exist from eight foundries (another foundry is known only through a guia).

Slightly more than half of these ingots are in private hands; the rest are housed in national museums in Brazil, Portugal and the United States. Monteiro collected five examples of the ingots over his six-decade journey in building the RLM Collection, making it one of the largest concentrations of colonial Brazilian gold ingots anywhere.

The late Carlos Costa, Portuguese collector (and friend of Monteiro), had 36 ingots in his collection, which is now part of the Banco Espirito Santo Museum in Lisbon.

The Smithsonian Institution in Washington, D.C., has a few through Eli Lilly’s donation, according to Heritage.

Far fewer guias exist today than ingots (though the census does not record the number known), and the high condition of the guia accompanying the ingot in the Heritage sale is “unheard of,” with the auction house rating it Very Fine with “great paper quality.”

Research from pre-eminent Brazilian numismatic researcher Kurt Prober reports that the bar in the recent sale was first illustrated in the auction catalog of Hans Schulman of New York in June of 1967 with a base price of $3,000.

The 1812 ingot of Sabara weighs 90.2 grams, a weight reported as “three ounces, one oitava and twelve grains” on the guia. That weight is the amount that remained to be cast into an ingot after a 20 percent tax on a deposit of 4 ounces of gold by a Joao Baptista Maciel. The bar was delivered on Jan. 7, 1812, and recorded as No. 79 for the year. It is unusually heavy compared to most other bars, which range from 30 to 40 grams.

The face value of these ingots was simply the weight in gold, despite the 960-real counterstamp on the face of the ingot. The value in reis, based on weight, would have been approximately 42,000 reis (calculating from the weight of an 1810 coin of 6,400 reis), according to Bierrenbach.

An 1814 ingot from Villa Rica realized $49,937.50, and the collection’s fifth ingot, from an unspecified foundry and made in 1832, will be offered Jan. 5, 2014, during Heritage’s New York International Numismatic Convention auction. That auction will include the third and final part of the RLM Collection, continuing to coins of an independent Brazil, the Empire and Republic, through 1922.