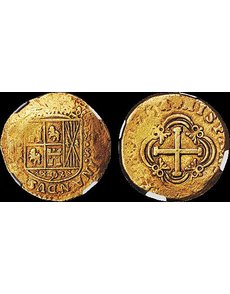 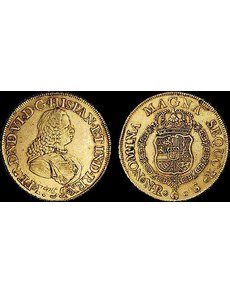 An apparently unique gold coin from Spanish colonial times is helping to explain the transition from hand-struck to machine-made coins in Colombia.

A unique milled gold 8-escudo coin from 1755, which was struck at the Nuevo Reino Mint at Santa Fe (Bogota) under Ferdinand VI in Colombia, highlights Stack’s Bowers and Ponterio’s Jan. 10 and 11 auction during the New York International Numismatic Convention.

The coin is the second known example of milled (machine-struck) coins from the Nuevo Reino Mint, the first having been discovered among the Louis E. Eliasberg Sr. Collection, which was sold in 2005. That piece is denominated 4 escudos.

No provenance is given for the 8-escudo coin in the forthcoming auction, nor is any information provided about the consignor or where exactly this coin turned up.

The date is unlisted in standard references like Gold Coins of the World by Arthur L. and Ira S. Friedberg and the Standard Catalog of World Coins by Chester Krause and Clifford Mishler.

Prior to discovery of the Eliasberg 4-escudo coin, “milled” or machine-made coinage from Colombia before 1756 was unknown. Combined with the Eliasberg coin, the recently discovered 8-escudo coin strengthens knowledge about the timeline for the transition between technologies, according to a lot description provided by the firm.

Previous to the Eliasberg discovery, experts believed production of crude, hand-struck “cob” coins continued until 1756, and machine-struck coins were introduced some time during that year after hand production had ended.

The discovery of the two machine-struck gold coins of 1755, and the existence of hand-struck 1756 gold “cobs,” suggests that the mint of Nuevo Reino underwent a longer transition than previously believed, rather than a sudden changeover in minting methods, according to the firm.

Researchers like Sewall Menzel, in Cobs, Pieces of Eight and Treasure Coins (published in 2004), detail the early workings of Spanish colonial mints in depth.

Menzel wrote that a royal decree from Madrid allowing for a transition to machine-struck coinage was issued June 9, 1728, but 25 years passed before the mint of Nuevo Reino began the steps leading to mechanization, which was finally accomplished in 1755 with the introduction of a screw press.

The milled gold coinage of 1755 was produced in the smallest quantity of any Colombian gold coinage of this era, based on mintage statistics in A.M. Barriga Villaba’s work about Colombian coinage, Historia De Las Casa De Moneda, according to Stack’s Bowers and Ponterio.

How many were produced?

Both 4- and 8-escudo denominations are recorded in production records, but an exact mintage is unavailable.

Records indicate that in 1755, just over 32 marks of gold were manufactured into milled 4- and 8-escudo coins, while the production of gold cob coinage in 1755 was equal to more than 8,393 marks of gold, or 262 times the milled coinage production.

The mark was a unit the Spanish used in calculating mintage figures, with one mark representing a half-pound silver bar (about 230 grams), according to Menzel. Each bar could produce 67 reales of about 3.4 grams each.

Gold escudos are also measured in weights of about 3.4 grams, so a mark of gold was likewise equal to 67 escudos (at face value, though, 16 reales equaled one escudo).

Because the mark weight recorded for the gold coinage of 1755 combines both denominations of coins, the exact number for each denomination may never be known.

“We did some theoretical math a month or so ago as to how many pieces would be possible,” Kent Ponterio told Coin World Dec. 4.

The math suggests that no more than 268 gold 8-escudo coins could have been produced from 32 marks.

“This of course is not correct as an unknown amount of these would have been 4 escudos,” said Ponterio.

Accounting for a mintage of 4-escudo coins, the mintage of the 8-escudo pieces would necessarily have been lower, perhaps significantly, than the calculated figure.

Today just four known examples of the 1755 8-escudo cobs are known, while the milled 8-escudo coin is unique.

An important factor affecting the survival rate beyond the already limited mintage was the gradual debasement of coinage within the Spanish Empire.

Gold Colombian coins in 1775 were struck from .917 fine gold, but in 1772 the standard was reduced to .901 fine. That change (and other periodic changes in fineness) saw earlier-dated coins pulled from circulation to be melted for profit, or recalled and reminted.

Politics also may have played a role in the melting of coins.

“During the Republican era it is almost certain that earlier Spanish issues were melted and re-coined either for simple profit or as a show of resentment towards Spain,” according to the auction firm.

Appearance of the coins

The obverse of the 1755 gold 4- and 8-escudo coins features a draped and armored portrait of King Ferdinand VI of Spain, with the order of the Golden Fleece suspended from his neck.

The reverse design features the Bourbon shield surmounted by the Spanish crown, encircled by the Order of the Golden Fleece.

The assayer mark S, at right on the reverse below the shield, represents Sebastian de Rivera.

The 8-escudo coin in the forthcoming auction has a “small natural mint made planchet flaw” on the reverse, minor deposits from circulation and light orange toning in places, according to the firm.

Professional Coin Grading Service has graded the coin Extremely Fine 45 in a Secure holder, and Stack’s Bowers and Ponterio estimates it will sell for $100,000 to $150,000.

The auction offers a comparison for the historical nature of the milled rarity.

The Eliasberg gold 4-escudo coin, which was graded About Uncirculated 53 by NGC, realized $103,500, including a 15 percent buyer’s fee in the Eliasberg auction of 2005.

For information about the upcoming New York sale, visit www.stacksbowers.com. ¦