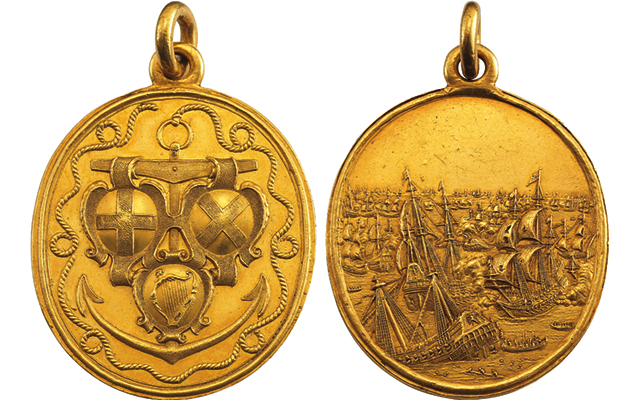 One of about eight or nine known Naval Reward gold medals from 1653 highlights the Woolley & Wallis Oct. 16 auction of the Christopher Foley Collection of Early English Medals. The medal is the smallest of three versions.

A gold British naval medal, one of perhaps eight or nine known, highlights a Woolley & Wallis sale of the Christopher Foley Collection of Early English Medals.

The auction, scheduled for Oct. 16, is led by the 1653 Naval Reward for Captains designed by Thomas Simon. The oval medal was issued in three types, in order of rank and monetary value, which may be distinguished by the surrounding border (or the lack thereof).

The award in the auction is of the third type, measuring 41 millimeters tall and 36 millimeters wide. It is categorized as the “Plaine Borderless” type by Marvin Lessen, whose exhaustive 1997 article in the British Numismatic Journal, Vol. 67, includes a census of the medals.

All types of the medal bear on their obverse the united shields of England, Scotland and Ireland suspended from the stock of an anchor. The anchor’s head is signed with the TS monogram. A rope from the anchor’s ring nearly encircles the central device.

The reverse of the medal depicts a naval engagement, the sea filled with ships. In the forefront a Dutch ship sinks, its stern signed SIMON; the prow of another is signed TS.

This, the smaller Naval Reward, was awarded to captains and officers of lower rank of the ships involved in the last of the three great naval battles of the First Dutch War, the Battle of Texel, on July 31, 1653.

According to Lessen’s research, 80 examples of the Third Type medal were issued. The gold medals had an intrinsic value of £3 at the time of issue, based on precious metal value, Lessen reports.

Lessen notes that because of confusing pedigrees (with some examples reappearing for sale), “seven distinct specimens can be defined today, with one or two more possibles out of the 15 listed, so perhaps eight or nine [survive] in total.”

Three of those medals are in museums in Great Britain, and only three examples have appeared at public auction since 1964 (a fourth was sold privately in 1986, according to the auction house).

Coin World could not confirm if additional medals have been discovered since publication of the 1997 research.

Several of the medals can be traced to their initial recipient, but the recipient of this medal is unknown.

The lot leads the comprehensive collection of 600 medals assembled over the past 25 years or so by Christopher Foley, longtime director of Lane Fine Art Ltd., which deals in English paintings.