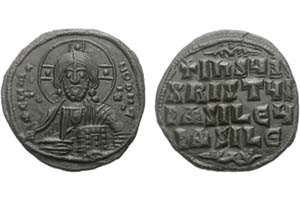 This anonymous follis, on which Christ holds the Book of Gospels and raises his right hand in benediction, is thought to have been struck circa A.D. 1020 to 1028. 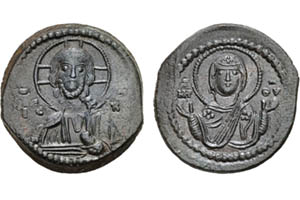 Christ holds a scroll and raises his right hand in benediction on this follis circa A.D. 1065 to 1071. The reverse shows the Virgin Mary with her hands raised in prayer (orans). 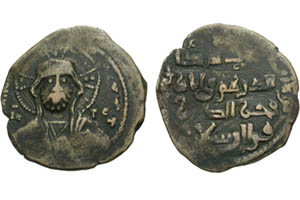 The Byzantine bust of Christ was sometimes copied, including on this copper dirhem of Fakhr al-Din Qara Arslan, who ruled the Islamic Artuqid dynasty from A.D. 1144 to 1174. 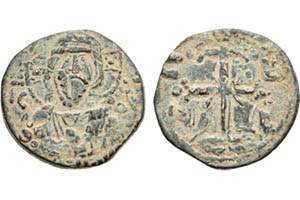 This rare follis is thought to have been struck in Thessalonica in the summer of A.D. 1078 by the rebel Nicephorus Basilacius. It copies folles in use at the time.
Previous
Next

The coinage of the Byzantine Empire received a major face-lift early in the reign of the Emperor John I (A.D. 969 to 976): The image of the emperor, which had long appeared on the standard copper coin (the “follis”), was replaced with that of Jesus Christ.

More so, even the name of the issuing emperor disappeared, being replaced by inscriptions dedicated to Christ.

The fact that the emperor’s image and name were excluded from these coins has given rise to their familiar classification as “anonymous” folles. They were struck for nearly 125 years, until the Emperor Alexius I (1081 to 1118) reformed Byzantine coinage in 1092.

When the first of these anonymous folles was struck — perhaps in the year 970 — an image of Christ was nothing new to Byzantine coinage. It had appeared frequently on gold coins of the previous 275 years. However, when John I chose to portray Christ rather than himself on the widely distributed copper coinage, it was truly an innovation.

This large and diverse series of anonymous folles consists of 16 distinct issues, the chronology of which has been difficult to establish. Generations of scholars struggled to attribute these coins to specific emperors.

The arrangement by Margaret Thompson in the mid-20th century, which assigns a letter to each successive issue, was based upon her work with excavations at the Athenian agora in the 1930s. Her approach has stood the test of time, though it was expanded and fine-tuned by Philip Grierson in 1973, based upon the massive Byzantine coin collection at Dumbarton Oaks, in Washington, D.C.

The most helpful feature in developing this chronology was the fact that so many anonymous folles are overstruck on older coins that were withdrawn from circulation to be used as planchets for new issues. In these cases, the undertypes provide the earliest possible date — a terminus post quem — at which a coin could have been struck. Collectively, they help to establish firm dates for some issues and to outline a relative chronology for the series as a whole.

From the reign of John I until Constantine X (1059 to 1067), anonymous folles were the only kind issued. Then, starting with the reign of Constantine X, folles bearing the name of the issuing emperor were struck alongside the anonymous types, which makes all subsequent issues somewhat easier to classify.

The obverses of all anonymous folles portray Christ. The issues struck up through about 1050 (categorized as Classes A, B and C in David Sear’s 1987 book Byzantine Coins and Their Values) identify the bust as that of Christ Emmanuel, and those afterward as Jesus Christ. In some cases the images appear to have been inspired by famous icons, and in other cases, perhaps, by the well-known images of Christ Antiphonetes and Christ of Chalke. In every case Christ is shown full-facing with a cross and nimbus clearly visible behind his head, reflecting the standard iconography of the era.

Though the general format of the anonymous folles is repetitive, with the obverse showing an image of Christ and the reverse usually showing an inscription, a cross or both, much variety is within. Also, some issues seldom survive in attractive condition, and certain types are extremely rare in any grade, which make the series interesting and challenging to collect.

The presentation of Christ varies from one issue to another, either in the format or in detail. Usually, Christ is represented as a facing bust shown from the waist up or as a full figure enthroned. On one occasion, he is shown standing. Most often Christ holds the Book of Gospels, but sometimes a scroll. Furthermore, he can be shown holding the Book of Gospels with both hands, or only with his left hand as he raises his right hand in benediction. The latter type is the iconic image of Christ Pantocrator.

The reverse types are also varied. The earliest issues (categorized as Classes A1, A2 and A3), struck from about 969 to 1028, bear a formulaic Greek inscription in four lines that translates to “Jesus Christ, King of Kings.” The next issue (Class B), belonging to the period 1028 to 1042, has a slightly abbreviated version of that inscription that is arranged around a cross set upon a three-step base.

The next anonymous folles (Class C), believed to have been struck circa 1034 to 1050, were original in two respects: the obverse shows Christ standing and the reverse bears a different Greek inscription that translates to “May Jesus Christ Conquer.”

The three issues (Classes D, E and F) attributed to the period 1042 to 1067 all bear on their reverse the original “Jesus Christ, King of Kings” inscription. However, their obverse types vary: Class D shows Christ seated, holding the Book of Gospels with both hands; Class E shows the facing bust of Christ holding the book with both hands; and Class F shows Christ seated, holding the book with his left hand and raising his right hand in benediction.

These were followed by an issue (Class G) attributed to the period 1065 to 1071, which is the most distinctive in the series. The obverse shows the facing bust of Christ, who holds in his left hand a scroll and raises his right hand in benediction. The reverse shows the facing bust of the Virgin Mary, nimbate and raising her hands in prayer (orans). Her image is accompanied by an abbreviated Greek inscription for “Mother of God.”

Most coins of the remaining classes (H to N) appear to have been struck from circa 1070 to 1080, with those of Class K perhaps being struck as late as 1092. There is relative consistency in these final issues, as all show on their obverse the facing bust of Christ (except Class M, on which Christ is seated) and on their reverse a cross (except Class K, which revives the Virgin orans type).

The most interesting design element of these last issues is the cross. Three show a Patriarchal cross and four show a Latin cross, some of which are placed over a crescent or are set upon a base. The fields usually are decorated with pellets, crescents or floral ornaments, and sometimes are accompanied by the inscription IC XC NIKA (“May Jesus Christ Conquer”).