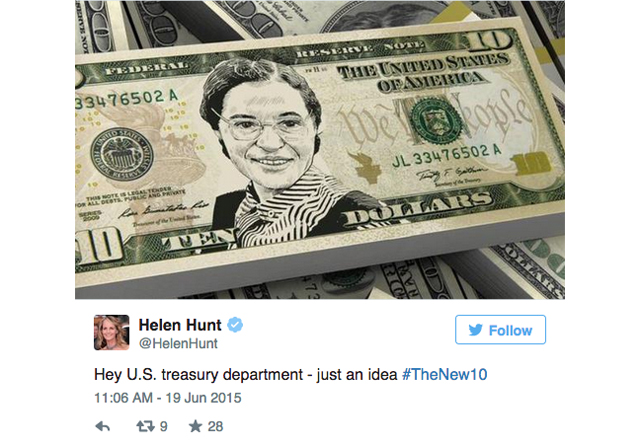 Actress Helen Hunt tweeted her recommendation after news broke that the U.S. Treasury is planning on putting a woman's portrait on the $10 bill.

U.S. Treasury Secretary Jacob Lew announced on June 17 that the department is planning to place a woman's portrait on the $10 bill beginning in 2020.

Though many details of the development—such as where on the bill the to-be-determined woman would appear and whether she would completely replace current resident Alexander Hamilton or accompany him—have yet to be hashed out, there are plenty of opinions about putting a historical lady on U.S. paper money.

Here are some notable ones:

Lew: “America’s currency is a way for our nation to make a statement about who we are and what we stand for.  Our paper bills—and the images of great American leaders and symbols they depict—have long been a way for us to honor our past and express our values. We have only made changes to the faces on our currency a few times since bills were first put into circulation, and I’m proud that the new 10 will be the first bill in more than a century to feature the portrait of a woman.”

U.S. House Democratic Leader Nancy Pelosi, D-CA: “The decision to add a woman to our paper money is exciting news for all Americans.  This is a proud day and an important step forward for our nation in celebrating women’s invaluable contributions to our democracy. It is especially fitting that the new bills will arrive in 2020, on the 100th anniversary of the 19th Amendment that secured women’s right to vote. They will remind us of the undeniable fact of our country: when women succeed, America succeeds. ... The new bills may be worth ten dollars, but the recognition of women’s leadership in our history is worth much, much more. I look forward to a lively debate about which of the many exceptional American women should be on the new ten.”

U.S. Sen. Jeanne Shaheen, D-NH: “Today, those voices all across the country calling for the contributions of women to be honored on our paper currency, were heard and now change is happening. This announcement follows a tremendous grassroots movement that spread through the power of social media and good old fashioned word-of-mouth. While it might not be the twenty dollar bill, make no mistake, this is a historic announcement and a big step forward. Young girls across this country will soon be able to see an inspiring woman on the ten dollar bill who helped shape our country into what it is today and know that they too can grow up and do something great for their country. I want to congratulate the Women on the Twenty effort and encourage all who participated to continue making your voices heard as this process to redesign the ten dollar bill gets underway.”

Women On 20s (via Twitter): "#womenon20s is psyched that @USTreasury will finally #breakthepaperceiling. But apparently the $10 is the new $20. Not perfect. #TheNew10"

Speaking of #TheNew10, here is what some other notable Twitter accounts had to say on the topic: