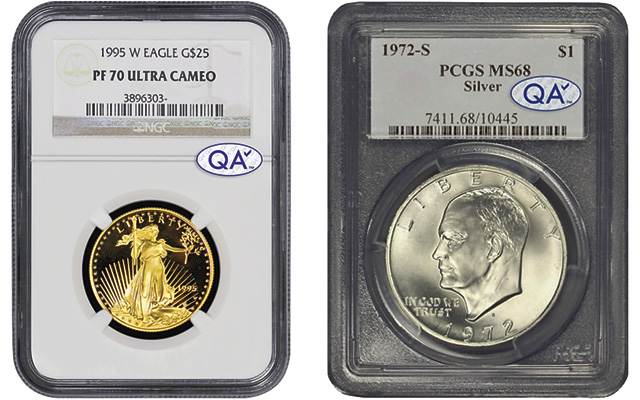 Prototypes indicate the quality of modern coins that would receive the QA? sticker for being "solid quality" for the certified grade.

Coin submissions will be accepted beginning Jan. 7 in conjunction with the Florida United Numismatists Convention in Orlando.

James Sego, president and head grader of the new entity, said the firm will place its QA? sticker on certified Professional Coin Grading Service- and Numismatic Guaranty Corp.-encapsulated coins that meet the company's criteria. The new entity was established in Idaho after Sego moved his numismatic ooperations, JMS Coins, from Chicago.

The company will have a minimum of two highly experienced modern coin graders review each coin for its assigned grade. Only coins that meet the company’s strict grading criteria that are “solid quality” for the grade will be given the  QA? platinum sticker. Solid quality coins, according to the firm's website, are coins that have no obvious issues for the assigned grade. Factors that would preclude being stickered include carbon spots, unattractive toning, fingerprints, or below average strike for the grade.

Coins that are, in the opinion of Quality Assurance, accurately graded but not solid for the grade won't receive the platinum sticker, but will still be assessed the verification examination fee. The fee is based on the value of the coin submitted.

"Superlative quality" coins will be assigned a special rainbow sticker. The rainbow sticker is reserved for coins that are exceptional in one or more of the following ways: color, cameo contrast and/or strike or luster. Less than .5 percent of the coins Sego expects to be submitted are anticipated to fit this criteria, he said.

Coins may be submitted for the Quality Assurance service through authoirized dealers for which a directory is posted on the firm's website, or by joining the Quality Collectors Club.

Collectibles Quality Assurance Company LLC will verify grading for all modern U.S. coins. The list of accepted coins includes all Lincoln cents, 1909 to date; all Jefferson 5-cent coins; all Roosevelt dimes; Washington quarter dollars (all Proofs and Mint State Coins from 1965 to date); all Kennedy half dollars; all Eisenhower dollars; all Anthony dollars; all Sacagewea dollars; all Presidential dollars; all modern commemoratives from 1982 to date; all American Eagles (silver, gold and platinum). Contact the firm for additional coin series.

Mint State and Proof coins for all series listed above will be accepted. Details on how to submit coins can be found on the website.

According to Sego, the market for modern coins is estimated to exceed $4 billion annually.

"The growth of collector and public interest in contemporary U.S. Mint products demonstrates the importance of this market to the numismatic industry," according to Sego. "Currently more than 15,000,000 modern U.S. coins have been graded by the major grading services. The number of coins in this universe has been growing at a rate of more than 1,000,000 newly graded coins per year."

The principals in Collectibles Quality Assurance Company LLC are:

??James Sego, currently the owner of JMS Coins (est. in 1986), is the principal grader and president. Sego has been a pioneer in the field of modern coins. Realizing that Eisenhower dollars were very difficult to obtain in high grade, Sego began submitting them for grading. He then began supplying dealers and collectors with high-graded examples. Sego indicates he has always embraced modern coins for their beauty and collectibility. Sego earned his bachelor's degree in economics and German from the University of Georgia, and his master's degree from Pepperdine University. He also has extensive corporate experience, having held senior management positions for The Quaker Oats Company in a variety of different field and headquarter locations.

??Gary Knaus is senior vice president in charge of operations. Knaus brings a long history of collecting coins. Knaus began his career as a teenager, working for a Chicago area coin shop. In addition to numismatics, his career has included creating successful publishing and software firms that were sold to Fortune 200 companies. Knaus has been extensively published, including in the numismatic industry. Knaus received his Bachelor of Arts degree from Southern Illinois University and Master of Business Administration from the University of Chicago’s Booth School of Business.

??John DeRocker is on the board of governors of the company. DeRocker is very well known within the collecting community as a collector of currency and high-grade modern coins. DeRocker started collecting coins and currency in the early 1980s. DeRocker has formed and owned several U.S. and international computer-based companies over his 25 years in the IT industry. His companies serviced multiple Fortune 500 companies like 3M, Pillsbury, Cargill and others. DeRocker retired from the IT industry in August 2013 to focus on his family and his collecting passion. DeRocker's knowledge of business and servicing the customer first via one-on-one communicationt drives his passion for collecting and servicing the end customer.

? Mike Ellis, senior grader, has 15 years professional grading experience. Ellis was formerly the head grader and finalizer at Dominion Grading Service, as well as authenticator, chief attributor and grader at ANACS and Independent Coin Grading. Ellis is currently an error and variety examiner and attributor for CONECA, a position he will maintain. Ellis has been an instructor at the American Numismatic Association Summer Seminars teaching grading and minting classes since 1996, and is an ANA governor. Ellis is the current general editor of the Cherrypickers' Guide to Rare Die Varieties. Additionally, Ellis has made many discoveries in numismatics and has been published numerous times in multiple publications.

??Jason Fishman, senior grader, brings more than 15 years experience as a professional numismatist. Fishman has been involved in the business as a trader, buying and selling coins full time. Fishman previously was a wholesale and retail trader at Modern Coin Mart. He discovered a significant modern Mint pattern that was accidentally released by the U.S. Mint in 2007 (the Frosted Freedom Proof Platinum Eagle). He has contributed articles to numerous coin publications. Fishman is currently an associate member of the Professional Numismatists Guild.