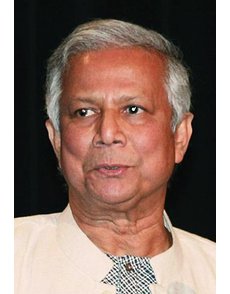 Dr. Muhammad Yunus, the recognized developer of the concept of microcredit, and founder and former managing director of Grameen Bank, is scheduled to receive his congressional gold medal April 17 in ceremonies in the U.S. Capitol Rotunda.

A concurrent resolution was introduced in the House of Representatives March 6, passed, and subsequently passed in the Senate to reserve the Rotunda for the ceremonies.

The Yunus medal was approved “in recognition of his contributions to the fight against global poverty,” according to the enabling act.

The U.S. Mint anticipates producing 3-inch and 1.5-inch bronze duplicates of the Yunus medal for sale to the public.

The U.S. Mint is not planning to publicly release the obverse and reverse designs adopted for the medal until the day of the ceremony.

The CFA and CCAC sent their separate recommendations to then Treasury Secretary Timothy F. Geithner for his final approval.

The two advisory panels differed from one another in their selections of obverse and reverse designs for the Yunus medal.

Yunus and Grameen Bank were co-recipients in 2006 of the Nobel Peace Prize for their efforts to fight worldwide poverty. ¦