Yellowstone 5-ounce coin on sale May 17 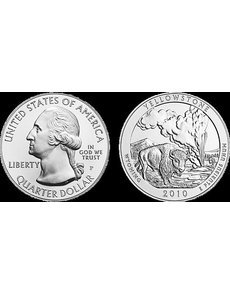 The coin is currently priced at $279.95, but as with all products sold by the United States Mint containing precious metals, pricing is subject to change.

Orders will be limited to one coin per household for the first week of sales. At the end of one week, the U.S. Mint will re-evaluate this limit and either extend, adjust or remove it.

The U.S. Mint will accept orders at www.usmint.gov/catalog or through its contracted order fulfillment center in Indiana by telephone at (800) 872-6468. Hearing- and speech-impaired customers with TTY equipment may order at (888) 321-6468.

Each of the America the Beautiful 5-ounce silver coins is being offered in two versions: a bullion version targeted at investors and an Uncirculated version targeted at collectors. Both the bullion version and the collector version are struck at the Philadelphia Mint, but only the collector version bears the facility’s P Mint mark. Five different coins are issued annually, for a total of 10 coins when considering the two versions of each.

The Uncirculated 2010-P Yellowstone National Park 5-ounce coin is the second of the five collector coins for 2010 to be offered to the public. The coins were struck in 2010, according to the Mint, but sales of them were delayed until 2011.

The collector version is sold by the U.S. Mint directly to the public, while the bullion version is sold through a network of authorized purchasers for resale into the secondary market.

The Uncirculated 5-ounce coins are struck on the same silver blanks as the bullion version. The Uncirculated coins receive a post-strike treatment resulting in a different finish.

To protect its Uncirculated finish, each coin is enclosed in a capsule and protective outer box and accompanied by a certificate of authenticity.