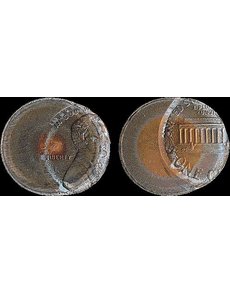 This off-center Lincoln cent shows a bull’s-eye pattern of copper deposition. The planchet is also characterized by an abnormal style of upset rim. 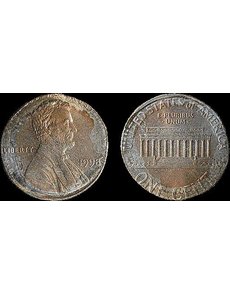 This 1998 Lincoln cent was struck on an undersized, underweight (2.05 grams) zinc planchet, not intended for U.S. coinage, with a central island of diffuse copper plating visible on each face. Each island of copper is surrounded by a ring of exposed zinc. 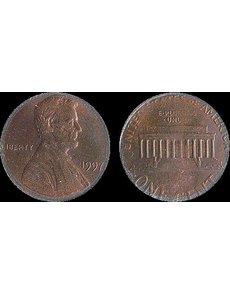 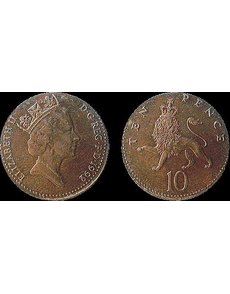 This 1992 British 10-penny coin was struck on an undersized steel planchet with a diffuse layer of copper plating.

Since their introduction in 1982, the copper-plated zinc planchets used for Lincoln cents have been affected by a wide variety of plating defects.

Plating that is poorly bonded to the zinc core may blister, crack or peel. Surface contaminants trapped between the copper plating and zinc core can initiate subsurface corrosion, which will cause the metal to swell and push up the copper plating in the form of small, circular, solid mounds.

Mishaps in the plating bath can result in unplated or partly plated planchets. Other mishaps can lead to plating that is too thin, too thick, or oddly diffuse.

Patterns of copper deposition associated with plating mishaps are highly variable and can assume unusual and oddly precise patterns. Bull’s-eye patterns have appeared on a number of coins, like the off-center cent shown here.

The foregoing is by no means a complete list of recorded plating defects.

Many countries besides the United States use zinc and steel planchets that are plated with copper and occasionally other metals. Not surprisingly, these planchets can suffer from the same plating problems as domestic cents.

A highly desirable combination error is produced when a domestic design is struck on the wrong planchet (domestic or foreign) and that planchet simultaneously has a plating defect.

The illustrated 1998 cent was struck on a foreign planchet with defective plating. It weighs 2.05 grams, significantly less than the normal weight of 2.5 grams. A patch of diffuse copper plating with a vaguely ameboid shape is seen in the center of each face. The circular outline of the coin itself is slightly irregular.

A very similar pattern of deposition is seen on a 1997 cent that was also struck on a foreign planchet. It weighs a mere 1.5 grams according to Professional Coin Grading Service. As with the previous piece, the copper plating is diffuse and is surrounded by a ring of exposed zinc.

Because the outer ring is relatively narrow, it’s possible that this planchet was originally completely covered by diffuse copper plating.

When the coin was struck, the expanding zinc may have simply extruded beyond its thin copper jacket. Extrusion of the zinc core is seen on the partly plated off-center cent that led off our discussion.

The lighter population also has a smaller diameter when struck. I suspect that each population was destined for a different issue and a different country. However, since examples of intermediate size and weight do exist, I can’t be certain of this.

Sometimes the latter would get mixed in with shipments of cent planchets, and among these unintended hitchhikers would be planchets with defective plating.

Our last specimen is a 1992 British 10-penny piece struck on a foreign steel planchet with a diffuse layer of copper plating.

I don’t know what country this planchet was originally intended for, but the same can be said for the two previous domestic cent errors.