Writing a long time ago 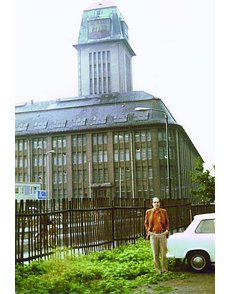 The author, Dave Bowers in Leipzig, East Germany, behind the Iron Curtain, Aug. 2, 1975 — a long way from Coin World.

When I started writing a column for Coin World in 1961 at the suggestion of editor Margo Russell, it was titled “Numismatic Depth Study.” In recent decades it has been called “The Joys of Collecting.” I suppose I could call it “The Joys of Writing” just as well, for creating these weekly commentaries has always been a pleasure.

Never has the editor — first Margo, next Beth Deisher, now Steve Roach — suggested that I write or feature something in particular or avoid a controversial or sensitive subject. I consider that to be wonderful and remarkable!

In the early years I typed words, sentences and paragraphs on an electric IBM Executive typewriter, the latest thing — replacing the mechanical Royal model with “Magic Margins.” Then in the early 1960s, IBM, which had a factory near my office, made available some of the first IBM Selectric typewriter models, with a replaceable metal ball. Remember those?

Office copying machines were unknown, at least to me, although later in the decade I had a 3M heat-sensitive copier that made thermal copies of printed documents. The fax was not available for personal use, and the only “Web” was that of a spider, say of Charlotte.

The only way to send my weekly column off to Coin World was by mail, which at the time was divided into regular mail, air mail and special delivery. FedEx hadn’t been founded yet and a small, personal fax machine was not yet available. In fact, both were several years away. For the convenience of both of us, I sent my columns early, and if I did not hear anything I presumed all was fine, which it was. There was no size limit at the time. Some weeks I would use just a few paragraphs, others close to a full page.

In the 1960s and 1970s, I did quite a bit of traveling in Europe, including on an unlimited pass in East Germany behind the Iron Curtain, and for a decade I was co-owner of the Mekanisk Music Museum in Copenhagen — an exhibit of music boxes, coin-operated pianos, violin players and the like.

While overseas I either did several columns in advance or else air-mailed them to Margo a week or so ahead of time.

Today, my usual column is about 480 words plus an illustration. I make it a point to finish by Sunday evening so the text will arrive at the desk of senior staff writer Paul Gilkes by email on Monday morning. Air mail and special delivery are no more. Instead, if need be I can get up early on Monday, type it out on my PC, and email in an instant.

Who could have imagined such a thing back in 1961?