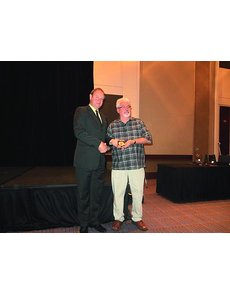 Paul A. Gilkes accepts the Burnett Anderson Memorial Award for Excellence in Numismatic Writing from Mark Anderson, a son of Burnett. 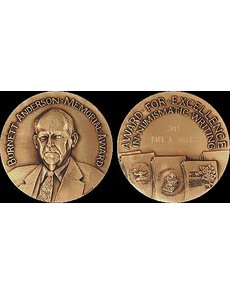 A portrait of the late numismatist and author Burnett Anderson appears on the obverse of the Burnett Anderson Memorial Award for Excellence in Numismatic Writing. The inscription of the year and recipient are on the reverse 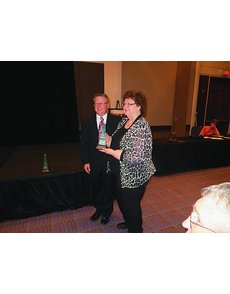 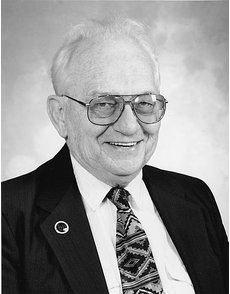 The late numismatist, error coin specialist and author Alan Herbert was inducted into the Numismatic Hall of Fame.

Two numismatists and writers with connections to Coin World received high honors during the American Numismatic Association World’s Fair of Money during the ANA banquet Aug. 16 in Rosemont, Ill.

Gilkes joined Coin World in 1988, a move that provided him the opportunity to combine his love of coin collecting with his career as a professional journalist.

Since then, more than 5,000 stories bearing his byline have been published in Coin World.

At around age 8 he began accompanying his dad each Saturday as the newspaper delivery boys and girls paid their weekly paper bills. His dad allowed him to comb through the change received, picking out coins he wanted and replacing those he selected with other cash.

As he remembers, the “best coin I ever plucked out was a heavily circulated Trade dollar someone used to pay for their subscription. I got it for $1.”

Although no one else in his family was interested in coin collecting, his parents encouraged and supported his interests by purchasing for him a “Red Book” and Whitman folders for Lincoln cents, Jefferson 5-cent coins, Roosevelt dimes, Winged Liberty Head dimes, Washington quarter dollars, and Walking Liberty and Franklin half dollars. The first Boy Scout Merit Badge that Gilkes received was for coin collecting.

Although he still has his cent folders, he cashed in all of his circulated silver coins in 1980 when silver hit $50 an ounce and used the proceeds to purchase his first new car.

In early 1977 he began his career as a freelance writer for a chain of weekly newspapers east of Pittsburgh and eventually was hired full-time as a writer and editor.

In late 1978 he became a reporter and photographer with the Winter Haven Daily News Chief in Florida, and shortly after arriving he was promoted to city editor.

In March 1980, he moved back to Pennsylvania to be bureau chief for the Times Publishing Co. (headquartered in Erie, Pa.), in its Meadville, Pa., office.

During his career at Coin World the U.S. Mint has been his primary beat. However, he has also covered a number of legal cases and congressional hearings.

Gilkes counts several stories among his most memorable. Two of those subjects include the saga surrounding the 1933 Saint-Gaudens gold double eagle sold in 2002 and the lengthy legal proceedings involving 10 1933 double eagles the government seized when the Langbord family presented them to the Mint for authentication.

He also cites coverage of the government’s pursuit of Bernard von NotHaus, creator of the Liberty Dollar private voluntary barter currency, as among his most memorable stories.

The Burnett Anderson Memorial Award for Excellence in Numismatic Writing is sponsored by F&W Publications and presented under the auspices of the ANA and the American Numismatic Society, with the participation of the Numismatic Literary Guild.

When he retired he turned his writing skills and numismatic interests into a second career in the early 1980s, becoming bureau chief in Washington, D.C., for Krause Publications, now F&W Publications. Anderson died at 79 in 1998.

She joined the Coin World staff in 1981 as news editor and served as executive editor before being hired to lead its editorial team. Her first assignment with Amos Press Inc., parent company of Coin World, was as news editor of the Sidney Daily News, where she served from January of 1977 until joining the staff of Coin World.

Deisher is a graduate of the University of North Carolina at Greensboro, where she earned a bachelor’s degree in English. Immediately after graduation she served as an International Farm Youth Exchange representative under the auspices of the National 4-H Foundation, living and working for six months with families in rural villages in Iran.

She began her career in professional journalism in 1969 as a staff writer for the Ledger-Star afternoon daily in Norfolk, Va. In 1972 she joined the Virginia Education Association as a communications specialist, where she edited a monthly newspaper and served as features editor of the Virginia Journal of Education.

She also produced award-winning radio programming and produced films for the state organization.

Deisher is author of all three editions of Making the Grade, grading guides for U.S. coins. While editor she supervised updates of six editions of Coin World’s Almanac and was founding editor of Coin World’s Guide to U.S. Coins, Prices & Value Trends, published annually since 1989.

In 2010, ANA recognized her contributions to numismatics by bestowing its highest honor, the Farran Zerbe Memorial Award. She was awarded the Numismatic Literary Guild’s Clemy Award in 1995 and received the Burnett Anderson Memorial Award for Journalistic Excellence in 2006.

Veteran numismatist and author Alan Herbert died Jan. 19, 2013, in South Dakota at the age of 86.

Although he did not begin collecting coins until he was in his 30s, Herbert gained a widely acknowledged reputation as one of the pioneering experts in the field of error and variety coinage.

Herbert entered the U.S. Army after graduating from high school in 1944. He served in Germany in the occupation forces.

Upon his return to the United States in 1948, he began a career in radio. He entered the Army Reserves at the start of the Korean conflict and was called back to active duty, where he became a combat correspondent for the Third Infantry Division.

He returned to the United States in 1951, working in several fields before returning to radio in 1955 in South Dakota, a career that would last for 29 years.

Herbert’s introduction to numismatics occurred in the early 1960s when he searched through some coins and found 13 silver dollars, among other pieces. He began regularly searching for coins.

His interest in error coins began about 1966. He was the first member of the Combined Organizations of Numismatic Error Collectors of America Hall of Fame.

He wrote a standard reference in the field, The Official Price Guide to Mint Errors, whose seventh edition he completed shortly before his death.

Also during the 1960s, he began a decades-long period of service with Krause Publications, Iola, Wis., both as a freelance contributor and as an employee. A column he wrote, most recently called “Coin Clinic,” appeared in virtually every issue of four Krause publications for decades. He retired from Krause in 1994.
Herbert was also a longtime member of the American Numismatic Association. He served on the ANA Board of Governors from 1999 to 2001 and from 2003 to 2007, and was returned to the board in September 2008 to fill the remaining term of Radford Stearns, who died in August 2008.

During his career he was presented with the ANA Medal of Merit and Glen Smedley Award.

In 1997 the Numismatic Literary Guild presented him with its Clemy Award. ¦