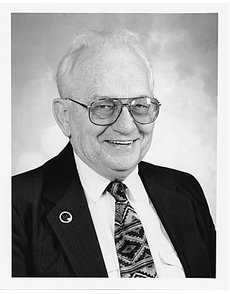 Although he did not begin collecting coins until he was in his 30s, Mr. Herbert gained a widely acknowledged reputation as one of the pioneering experts in the field of error and variety coinage.
As a young man, Mr. Herbert entered service in the U.S. Army after graduating from high school in 1944. In an interview published in Coin World in 1991, he said, “I saw the last month of combat in Germany during World War II as infantry reinforcement for field artillery.”
He served in Germany in the occupation forces for 44 months.
Upon his return to the United States in 1948, he began a long career in radio. He entered the Army Reserves at the start of the Korean conflict and was called back to active duty, where he became a combat correspondent for the Third Infantry Division. He returned to the United States in 1951, working in several fields before returning to radio in 1955 in South Dakota, a career that would last for 29 years.
Mr. Herbert’s introduction to numismatics occurred in the early 1960s. His station became involved in the local March of Dimes drive and Mr. Herbert took a leading role, he said in 1991. “A secretary at the station approached me during the 1963 campaign, explained that she and her husband collected coins, and asked if they could purchase some of the coins that we collected from the drive,” he told Coin World.
He decided to search through the coins the couple did not buy and found 13 silver dollars, among other pieces, he said. He began regularly searching for coins.
His interest in error coins began about 1966 when he discovered a 1935 Lincoln cent that appeared to have a “glob of gold” on the reverse, he said in 1991. He sent the coin to Coin World's Collectors’ Clearinghouse, where James G. Johnson explained that coin simply had a blob of glue stuck to it.
Mr. Herbert told Coin World in 1991 that his interest in error coins grew from there. Over the years, he became involved in several error coin organizations, taking leadership positions. He was the first member of the Combined Organizations of Numismatic Error Collectors of America Hall of Fame.
He wrote a standard reference in the field, The Official Price Guide to Mint Errors, whose seventh edition he just completed. He is credited with developing the “PDS” system of identifying error coins as Planchet, Die or Strike errors.
Also during the 1960s, he began a decades-long period of service with Krause Publications, Iola, Wis., both as a freelance contributor and as an employee. A column he wrote, most recently called “Coin Clinic,” appeared in virtually every issue of four Krause publications for decades. Although he retired from Krause in 1994, he remained author of that column until just recently.
Mr. Herbert was also a longtime member of the American Numismatic Association. He served on the ANA Board of Governors from 1999 to 2001 and from 2003 to 2007, and was returned to the board in September 2008 to fill the remaining term of Radford Stearns, who died in August 2008.
During his long ANA membership, he wrote and illustrated two sections of the ANA Correspondence Course and served as chairman of several board committees. He was recently finishing work on The Official ANA Dictionary.
For his service, the ANA presented its Medal of Merit and Glen Smedley Award to him.
He was a member of the Numismatic Literary Guild and was presented with the NLG’s Clemy Award in 1997.
Mr. Herbert was preceded in death by his first wife, Liselotte, and his second wife, Josephine, and an infant son.
He is survived by his half sister, two half brothers, five stepchildren, seven stepgrandchildren and 10 step-great-grandchildren.
Services were held Jan. 25 in Belle Fourche. Interment is at Pine Slope Cemetery in Belle Fourche.
In lieu of flowers, the family suggests gifts be made to the Josephine Herbert Memorial Fund at the Christian Life Center, 2020 Vista St., Belle Fourche, SD 57717.