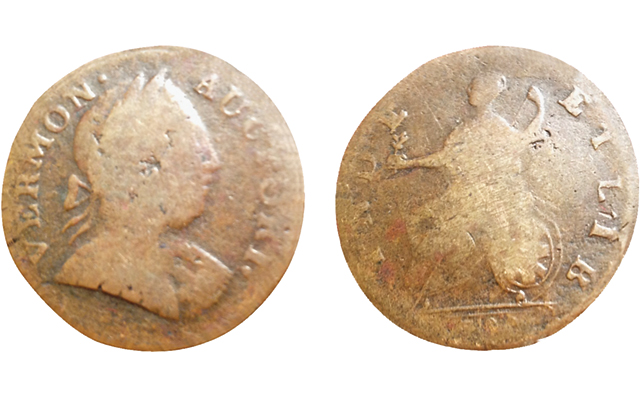 Offered without variety attribution on eBay with an opening bid of 99 cents, this worn 1788 Vermont copper is only the sixth example known of the Ryder 37 variety. It sold for $29,900.

Images courtesy of opie-jay on eBay.

Perhaps the most exciting aspect of collecting state coppers by variety is the hope every collector has of finding a great rarity unattributed. Though very rare varieties can sell for tens of thousands of dollars, with a little knowledge and luck, every collector has a chance to find an undiscovered prize in a dealer stock.

Over the last several decades, this unwavering hope has kept many Colonial specialists busy at coin shows, in coin shops, and at auctions, knowing that the odds dictate some success as long as they look at enough coins. Collections have been built, fortunes have been made, and legends have been written on the backs of such cherrypicking.

In the modern era, though undescribed rarities still turn up in all of the aforementioned places, eBay seems the most fecund field of all. Of course, eBay also allows all of the world’s well-studied Colonial numismatists to identify, study, and ponder every auction in the comfort of their own homes. It is rare, at this point, for a valuable variety to slip between the cracks.

On April 22, this fact was proven again. A seven-day listing for a 1788 Vermont copper was posted a week earlier, starting at 99 cents, listed by a seller who also offered doll heads, neckties, and record LPs.

If this was a common variety of 1788 Vermont copper, it might have been worth $250 or so in its grade, variously described between Good and Fine by those who saw it.

It was not common, though; this was a Ryder 37 (The Colonial Coins of Vermont by Hillyer Ryder), apparently the sixth example known.

In the last 25 years, only one other example had sold publicly, an extremely corroded piece that brought $8,350 in a 2011 Stack’s sale. Before that, an example had not been offered since 1987.

This one is considered among the finest survivors of this Rarity 7 variety (four to 12 known), somewhat worn though the reverse detail was also affected by softness related to the broken state of the die.

To Vermont specialists, this variety is considered fairly easy to recognize. Undoubtedly, each of those who saw it on eBay had dreams of being able to buy it for a song.

As it turns out, in the Information Age, hopes of being the only person to recognize a rarity are not as bright as they used to be.