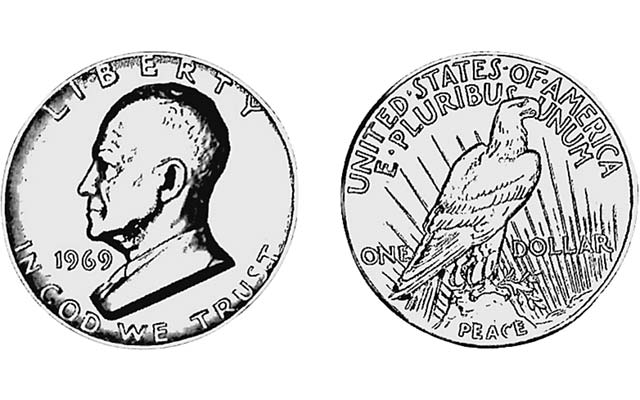 Sketches for the proposed Eisenhower dollar were displayed before the House Banking Committee on Sept. 30, 1969.

Work on the first Eisenhower dollar, a large-format dollar coin released in 1971, began June 19, 1945, immediately after Victory in Europe. Barely a month after Dwight David Eisenhower, supreme commander of the Allied Expeditionary Forces, accepted the Nazi surrender on May 8, 1945, he was feted June 19 in the largest ticker-tape parade ever held in New York City.

Frank Gasparro, who would later become the U.S. Mint’s chief engraver, was in the crowd.

Copley News Service recounted that day in a 1971 article on the dollar: “Gasparro got only a fleeting glance of Eisenhower as he rode by. He carried his image of Eisenhower’s courage and character back to work with him at the Philadelphia Mint. He immediately made a profile drawing suitable to cut directly in steel and capture the strong facial features that so deeply impressed him.

“When he was asked to design the Eisenhower dollar coin, he studied his first drawing of Eisenhower and some 30 other pictures before sketching his design for the face of the coin.”

The image that appears on the short-lived coin (1971 to 1978) shows Eisenhower a few years before he became president.

On Jan. 25, 1971, as trial strikes were being made at the Philadelphia Mint, Gasparro told the Associated Press the coin shows Eisenhower with more hair than he had as president. “I had to add the hair because when you strike a coin the luster on a bald head shines prominently,” he explained.

The reverse of the coin shows an eagle landing on the moon, a metaphor for the 1969 Apollo 11 moon landing.

The adopted coin looked nothing like the first proposed design to surface. A drawing of the proposed coin displayed at a Sept. 30, 1969, House Banking Committee hearing had a Peace dollar reverse and what looks like a mashup of the Kennedy half dollar and the Mint’s Eisenhower Presidential medal on the obverse.

The 1969 plan died in the U.S. House, victim of a fight between those who wanted a silver dollar and those who wanted a copper-nickel clad one. Rep. H.R. Gross, R-Iowa, who opposed the silverless dollar, said, “You would do the memory of President Eisenhower no favor to mint a dollar made perhaps out of scrap metal.”

The bulky coin, approved in 1970, proved unpopular and never circulated much. It was succeeded in 1979 by the small but also unpopular Anthony dollar.

This year, Eisenhower returns to the dollar as part of the small-size Presidential dollar series.