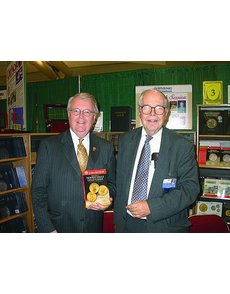 Part of “working” as a professional numismatist includes meeting interesting people, such as then U.S. Mint Director Jay Johnson, left, whom Bowers met at a coin show. Immersion in numismatics has kept a lot of collectors and dealers happy for all of their lives.

Retirement is the goal of countless millions of Americans.

In some occupations, such as certain state jobs in California or in the military, you can be “out” when you are in your late forties or early fifties. Then, a world of wonderful opportunities beckons: doing nothing for the rest of your life. Or, is this so wonderful?

At age 72 I plan to stay in the professional numismatics saddle until I am well over 100 years old, and plan to enjoy every year of it. “Work” can be defined several ways. “I have never worked a day in my life” is one of my favorite sayings, because I enjoy what I do in the wonderful world of numismatics. Most other dealers also stay in the trade for many years. I must also point to my fine, long-term (since the mid-1950s) collector friend Eric P. Newman, one of the finest and most accomplished people in American numismatics, who is still doing research and writing now, but will take time out on May 25 to observe his 100th birthday.

“Retirement has killed more people than hard work ever did” is a familiar saying, and it is true. However, some analysis is needed. If you have a downright boring dead-end job, by all means retire from it as soon as you can. But then get involved in some other occupation that is exciting and stimulating. Remember, Col. Sanders did not start his Kentucky Fried Chicken business until he was past retirement age.

Alan V. Weinberg recently sent me an article from the Los Angeles Times, “Work longer, live happier,” by Katherine Schlaerth of the University of Southern California School of Medicine, who stated:

“Americans are hard-wired to consider retirement age to be 65. … As a geriatrician, I’ve come to believe that working longer is generally a good thing. Most people just plain do better, both intellectually and physically, when they continue to work.”

For you the second time around can be “working” at a hobby, immersing yourself in it, meeting people, joining groups, and more. I give an example, numismatic of course: Clarence S. Bement, who formed one of the greatest collections of coins ever, did not start until he was more than 70!