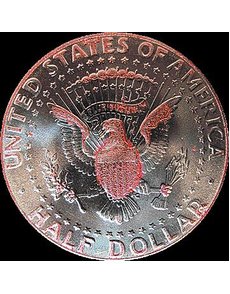 Lipstick adhering to the reverse face of this wobbly 2001-D Kennedy half dollar shows a central point of instability located on the eagle’s shield. The shield was exposed to contact by an inadequately developed design rim. 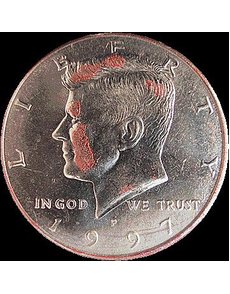 Lipstick adhering to the obverse face of this unstable 1997-P Kennedy half dollar shows an entirely normal scatter of high relief points. Affected areas include Kennedy’s cheek, eyebrow, base of neck and two spots in his hair. 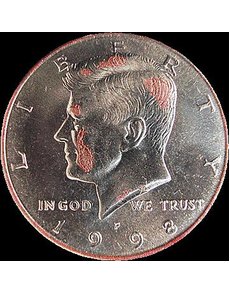 In this unstable 1998-P half dollar, an insufficiently elevated design rim allowed lipstick to adhere to predictable points of high relief on Kennedy’s bust. 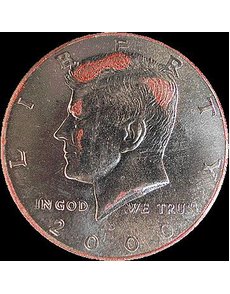 The same lipstick distribution as seen on the 1997-P and 1998-P half dollars characterizes this unstable 2000-D Kennedy half dollar.

A few months ago, I tackled the issue of wobbly half dollars — coins that would rock or spin when placed on a flat surface.

In that column, I noted that some cases — like the 2001-P Kennedy half dollars that led off the discussion — were clearly caused by a sunken reverse die that produced a corresponding bulge on the reverse face of the coin. In a second case — a 1972-D half dollar provided by Steve Rodriguez — I was not able to establish the source of the instability. A few weeks after the column came out, Rodriguez sent me a second 1972-D half dollar that was struck by a different die pair. Like the first coin, it rocked when the reverse was placed on a flat surface. In both coins, the highest point on the reverse was the eagle’s shield.

As with the earlier piece, identifying the cause of the instability was made difficult by the fact that there was only one example and there were no associated defects such as die cracks or centralized design weakness that might have pointed to a sunken die. I had to leave the coin in the suspense account, with respect to both the cause of the instability and whether the coin represented a Mint error (as opposed to post-strike damage).

Recent developments have left me more confident that both 1972-D half dollars represent Mint errors of a minor sort. The reason for my optimism is a large shipment of wobbly half dollars recently sent to me by Jon Leese. The shipment includes 13 2001-D Kennedy half dollars that rock when placed on the reverse face. Die markers show that at least two die pairs are represented. Not surprisingly, the point of instability is the center of the shield.

A second sample consisted of seven 1997-P half dollars, almost evenly divided between two different die pairs. Unlike the previous pieces, these rock when placed on the obverse face.

Rounding out the shipment were a single 1998-P Kennedy half dollar and a single 2000-D half dollar, each of which rocked when placed on the obverse face.

Further evidence in support of this conjecture is provided by a “lipstick test.” I smeared a thin, uniform layer of red lipstick on a piece of paper and placed the paper on a hard countertop. I then pressed several of Leese’s coins into the lipstick, making sure that the center of the coin and all points along the rim made contact with the paper. Each coin was then carefully lifted off the paper. Areas coated with lipstick represent the highest design points.

The reverse of one of the 2001-D half dollars shows a large deposit of lipstick on the eagle’s shield. This is the highest point of the design in normal half dollars. Lipstick has also stuck to some of the peripheral letters.

Patches of lipstick are rather dispersed on a 1997-P half dollar. Affected areas include Kennedy’s cheek, eyebrow, base of neck and two spots in his hair. These are the highest points of a normal design. Sunken die (die subsidence) errors will alter the normal array of high points and concentrate them in one area.

The lesson from this exercise is that, when one is confronted by a wobbly coin, one should first eliminate the prosaic explanation.