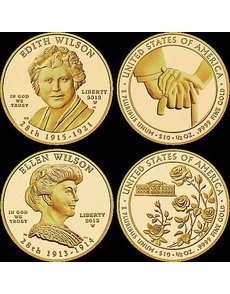 The last two of five 2013 First Spouse gold $10 coins depict the two women who were married to President Woodrow Wilson during his terms in office.

The Proof and Uncirculated 2013-W Edith Wilson First Spouse gold $10 coins were scheduled to go on sale by the U.S. Mint at noon Eastern Time Dec. 19.

Pricing, based on the U.S. Mint’s pricing structure, won’t be announced until sales begin.

The 2013-W Ellen Wilson First Spouse gold $10 coins went on sale at noon Eastern Time Dec. 9. Pricing for the Ellen Wilson coins opened at $815 for each of the half-ounce, .9999 fine gold Proof coins and $795 for the Uncirculated version.

The mintages for the Edith Wilson and Ellen Wilson gold coins are limited to a maximum of 10,000 coins for each issue, across both Proof and Uncirculated options. Customer demand will determine the ratio of Proof coins to Uncirculated coins produced within the total maximum mintage.

The reverse was designed and sculptured by U.S. Mint Sculptor-Engraver Donald Everhart II. The design depicts roses with the White House in the background, a tribute to Ellen Wilson’s creation of the White House Rose Garden in 1913.

The reverse was designed and sculptured by U.S. Mint Medallic Sculptor Joseph F. Menna. It depicts Edith Wilson supporting her husband, who had suffered a massive stroke. His right hand holds a cane, while her left hand rests warmly on his.

Under the provisions of the authorizing act, two First Spouse coins were issued for the presidency of Woodrow Wilson, since his first wife died and he remarried, both events occurring while he was in office. John Tyler also got two First Spouse coins for the same reason. Two Frances Cleveland coins were issued to mark the two nonconsecutive terms of office for her husband, Grover Cleveland.