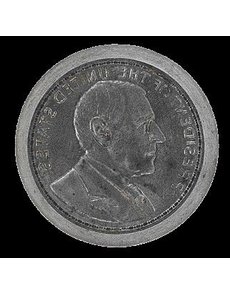 Object shown is believed to be a U.S. Mint die for the obverse of the 1920 Manila Mint Opening medal. 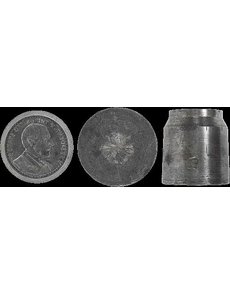 Images of the bottom of the die and the die as pictured from its side are shown here along with the face of the die. 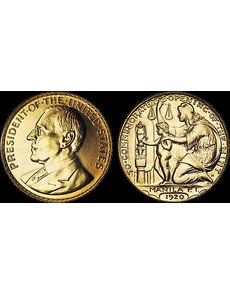 This 1920 Manila Mint Opening gold medal, graded Mint State 62 by Numismatic Guaranty Corp., is one of the five known strikes in gold, only three of which are extant. 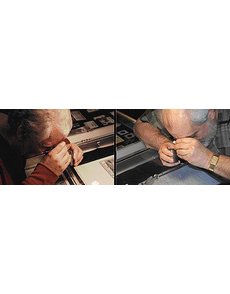 Shown at left is the die being examined by John Dannreuther at the FUN show; at right, Fred Weinberg also examines the piece. 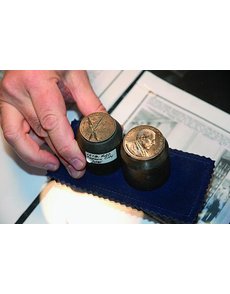 The die is shown side by side with a defaced 1872-CC Coronet gold $20 double eagle die. Two specialists in coining dies examined the medal die and stated that they believe it to be authentic. 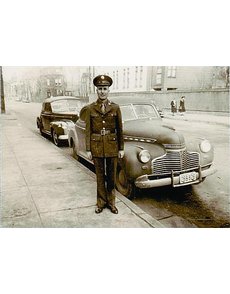 Warrant Officer Lloyd V. Spriggle is pictured in his U.S. Army uniform. Spriggle brought the die back to the United States following his service in the Pacific during World War II.

A U.S. Mint die used to strike the obverse of a medal commemorating the opening of the Manila Mint, the U.S. Mint’s branch in the Philippines, in 1920 has been brought to light.

The die, featuring a left-facing profile image of President Woodrow Wilson and the legend PRESIDENT OF THE UNITED STATES, was examined by Fred Weinberg and John Dannreuther at the Florida United Numismatists’ convention in Orlando, Fla., Jan. 5. Both Dannreuther and Weinberg, who have extensive experience in researching and examining U.S. Mint dies, stated that the die appears to be authentic.

The current owner of the Wilson die, Shawn Spriggle, said his grandfather, Lloyd V. Spriggle, a warrant officer in the U.S. Army who served in the Pacific Theater during World War II, brought the piece to the United States.

The elder Spriggle provided to his family a typewritten account of his service during World War II. Among the information contained in the account, a copy of which was provided to Coin World by his grandson, is that after enlisting, he was assigned to the Army engineers and took his basic training at Fort Leonard Wood in Missouri.

After that, the account says, he was assigned to Fort Belvoir, Va., where he served as an instructor for “a couple of years.” He later gained a commission as a warrant officer, and was assigned to the Transportation Corps with training at Camp Gordon Johnston, an amphibious training base in Carrabelle, Fla.

In December 1944, Spriggle was transported to the Pacific Theater, first landing in Hollandia, New Guinea (now Jayapura City, Indonesia). From there, he shipped out to Tacloban, Leyte, the Philippines.

Spriggle writes in his account that his outfit was the “54th Harbor Graft [Sic] T.C.” Likely that means that he served in the 64th Transportation Corps Harbor Craft Company, which served in that theater of operations according to the U.S. Army Center of Military History website at www.history.army.mil/html/forcestruc/lineages/branches/trans/0325trco.htm.

In Manila, Philippines, on an unrecorded date, Spriggle found the die.

American, Filipino and Japanese forces fought for control of the city from Feb. 3 to March 3, 1945, with the Japanese occupiers finally driven from Manila. The city was devastated during the battle, and the Mint facility was among the many buildings destroyed.

“The [Manila] mint next to the fort was a shambles and wide open. While there was no gold in it, there were several piles of silver coin stock in bars about 18 inches long 12 inches wide and three eights inches thick. Some of the boys picked up a few for souvenirs, but I figured they belonged to the Filippino’s [Sic] and picked up a die that was used to stamp a Wilson medal instead. The mint was left for several weeks before a guard was put on it and the Filippinos themselves raided it quite often. They were great on filigree work and used it as a base for that.”

According to Shawn Spriggle, the die was used as a paperweight for many years, as the family was unaware of its numismatic and historic value. Neither the grandfather nor father was a dedicated coin collector.

The die was passed to Shawn Spriggle’s father upon Lloyd V. Spriggle’s death, and was subsequently inherited by the younger Spriggle upon his own father’s death in 2008.

The United States government claimed sovereignty over the Philippines following the conclusion of the Spanish-American War of 1898, having defeated the Spanish there and in Cuba. Direct American governance of the islands lasted until 1935, when the nation gained commonwealth status. The Philippines gained complete independence from the United States in 1946 following the end of World War II.

The U.S. Mint branch in the Philippines, the Manila Mint, was the first, and only, U.S. Mint facility to operate beyond American shores.

The Manila Mint was established to strike coinage for the Philippines, to replace the Spanish Colonial money that was then circulating.

According to The Mint of the Philippine Islands, an American Numismatic Society monograph penned by Gilbert S. Perez in 1921, the machinery for the Manila Mint was “designed and built at Philadelphia under the supervision of Clifford Hewitt, then chief engraver of the United States mint.

“In June, 1919, it was assembled, tested and found satisfactory; it was then shipped to the Philippine Islands via the Panama Canal, arriving at Manila in perfect condition. Mr. Hewitt reached Manila at the end of the month and undertook the installation of the machinery.”

Prior to the opening of the Manila Mint, from 1903 to 1920, American coinage for the islands had been struck at the Philadelphia and San Francisco Mints, and then shipped to the islands. Denominations minted included half-, 1-, 5-, 10-, 20- and 50-centavo coins and the 1-peso coin.

The Philadelphia, San Francisco and Denver Mints briefly struck circulating coinage for the Philippines in 1944 and 1945, as the islands were being liberated from years of Japanese occupation.

Weinberg, an error coin specialist and dealer (found online at www.fredweinberg.com), examined the die during the FUN show, comparing it to a defaced 1872-CC Coronet gold $20 double eagle die he had on hand.

“It was very similar,” he said. “It had the same height, same size base. It had a patina that is consistent with genuine Mint dies. It did not look like a contemporary counterfeit. It just had the ‘right look.’ ”

“Based on my experience handling Mint dies, I would go on record saying that I am very confident that [the Manila Mint die] is genuine,” Weinberg said.

John Dannreuther of John Dannreuther Rare Coins (online at www.jdrarecoins.com) concurred with Weinberg’s opinion on the die’s authenticity, saying that the die “looked and felt right” — an observation that he admitted was “hard to verbalize.”

According to So-Called Dollars by Harold E. Hibler and Charles V. Kappen, the 1920 Manila Mint Opening commemorative medal was designed by Hewitt. U.S. Mint Chief Engraver George T. Morgan of the Philadelphia Mint sculptured and engraved the dies at the Philadelphia facility.

The obverse features President Wilson and the legend PRESIDENT OF THE UNITED STATES; the reverse of the medal depicts a figure symbolizing Justice (some accounts say “Liberty”), kneeling, with scales upraised by her right hand. Her left hand rests upon the shoulder of a nude youth who pours planchets from a small cornucopia into a coin press. Around the rim of the medal is the legend TO COMMEMORATE THE OPENING OF THE MINT. Below Justice is the legend MANILA P.I. (Philippine Islands) and the date 1920.

The Manila Mint was officially opened for business in a ceremony held on the morning of July 15, 1920. The U.S. governor-general of the Philippines, Francis Burton Harrison, coined the first piece struck at the Mint — a bronze 1-centavo coin. Sergio Osmeña, speaker of the Filipino House of Representatives, struck the first medal that same day.

The Manila Mint Opening medal, also known as the Wilson Dollar, was struck in three compositions: copper, silver and gold. All three medals are 38 millimeters in diameter. The Mint of the Philippine Islands recounts that 2,000 of these medals were struck on the first day of official operation, but does not specify if the first-day strikes were copper, silver or gold.

Of the three compositions, the silver and copper pieces are the most common, but still scarce. The issue was limited to 2,200 silver pieces and 3,700 copper strikes. Existing pieces typically sell for amounts between $200 and $1,000 at auction, depending upon their condition.

The gold Manila Mint medals, classified as HK-1031, are extremely rare, with only three existing examples known of the total of five struck. The website www.so-calleddollars.com states that one gold medal was given to President Wilson, one was presented to the U.S. secretary of war and the other three were retained in the Philippines.

One gold example, graded Mint State 62 by Numismatic Guaranty Corp., and termed the “finest of three known,” sold for $74,750 in a Heritage Auction Galleries sale, July 30, 2008, its last appearance in a public auction.

It has not been determined, and perhaps will never be known, if the surviving Manila Mint obverse die was used for striking the gold, silver or copper medal or a combination of any of the three. The “Dies Manufactured” charts in the Annual Report of the Director of the Mint provides no illuminating information. Neither the 1920 edition of the Annual Report (fiscal year ending June 30, 1920) nor the 1921 edition (fiscal year ending June 30, 1921) mentions specifically the number of dies manufactured for use in striking the Manila Mint medals, though both record other dies, manufactured for circulating denominations for the Philippines. ¦