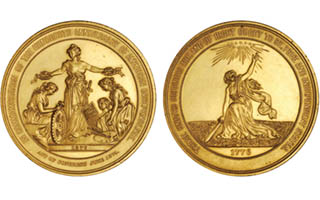 In 1876 the United States celebrated its Centennial and among the numerous commemorative items produced were tokens and medals. This medal, 58 millimeters in diameter and made of gilt copper, was designed by William Barber. It brought $329 at Stack's Bowers Galleries' March 26, 2014, auction held during the Whitman Expo in Baltimore.

On the obverse of this medal, Liberty places wreaths on the heads of figures representing Industry and Art. On the reverse, Liberty kneels with an unsheathed sword. The copper gilt medals originally sold for $3 and copper medals, which originally cost $1, can be found today for less than $200.