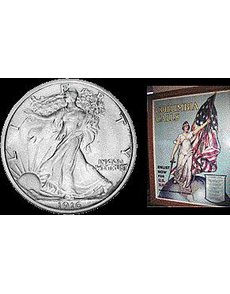 A collector notices a similarity between a recruiting poster and the Walking Liberty half dollar. Though “Columbia” and “Liberty” are both representations of America, for U.S. coins “Liberty” is the title commonly used.

This question arises because I have a 1917 U.S. Army recruiting poster that has Miss Columbia on it, complete with wrapped flag dress and small cap. It is obvious from this that the woman depicted on the Walking Liberty half dollar and Standing Liberty quarter dollar is actually Miss Columbia. It is apparent that these coins were all introduced at the same time as the poster, and are not Liberty. Did Columbia somehow fall into disfavor?

From the establishment of the United States through the early 1900s, the name “Columbia” was frequently used to describe America, but is not a term commonly used now.

Calling the lady featured on U.S. coinage “Columbia” wouldn’t necessarily be incorrect, as it is merely another term for “America,” but as far as coinage is concerned, her predominant title is “Liberty,” a term used not only by numismatists, but by the issuing authority — the U.S. government.

As well, the legend “Liberty” has been a near-constant presence on U.S. coins since the outset, thus the affiliation between the legend and the lady.

The Greco-Roman influence carried over throughout the 1800s and continued even into the first decades of the 20th century, in which designers gave Liberty new life, exemplified by such coins as the Walking Liberty half dollar and Standing Liberty quarter dollar (both introduced in 1916). Weinman’s Winged Liberty Head (Mercury) dime is another example.

As for the Standing Liberty quarter dollar design, Cornelius Vermeule, in Numismatic Art in America, writes “[Hermon] MacNeil’s Liberty is presented as Athena of the Parthenon pediments.” As for Adolph A. Weinman’s Walking Liberty design, Vermeule writes “The debt to [Frenchman Oscar] Roty’s Sower is obvious, but the Liberty Walking is an original creation, not a slavish copy.” Roty’s Sower design first appeared on French coins dating from the 1890s.

“Readers Ask” recommends that hobbyists interested in the artistic origins of U.S. coinage purchase or borrow the second edition of Vermeule’s Numismatic Art in America, published in 2007, as mentioned above.

Another recommendation is Roger W. Burdette’s three-volume work, Renaissance of American Coinage, published from 2005 to 2007.